30 Apr 2014 If Politicians Care About Liberty, They Need To Fight For It

ConservativeBlog.org
Posted at 02:08h in Blog, Health by David Hogberg

Alas, the GOP is not called the stupid party for nothing.  If Republicans are really serious about restoring liberty in health care, then they need better tactics than talking without first thinking and preemptive surrender.

The first case in point is Rep. Cathy McMorris Rodgers (R-WA) who reportedly said that it was unlikely that ObamaCare would be repealed.  It’s not clear exactly what she said; Rep. McMorris Rodgers later denied making such remarks and that the newspaper that reported them were paraphrasing what she said. 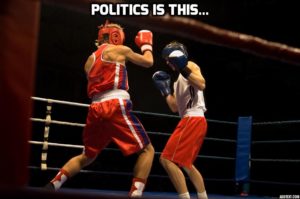 Fair enough, but Rep. McMorris Rodgers is entering her tenth year in Congress, so she’s not exactly a virgin when it comes to dealing with the press.  Her one remark that was reported in the original story was, “We need to look at reforming the exchanges.”  If you say that instead of “getting rid of the exchanges,” then the press is going to turn it into a “GOP Congresswoman says ObamaCare is here to stay story.”  Rep. McMorris Rodgers should know that by now.

That can easily be avoided by (1) NOT talking about parts of ObamaCare that need to be reformed, (2) Talking about reasons why ObamaCare needs to be repealed (i.e.—why it is a bad law); and (3) Throwing out a few ideas for what to replace it with.  Do that, and there shouldn’t be any more stories about Republican lawmakers saying ObamaCare is likely here to stay.

On the preemptive surrender front, Senate Republicans are sending mixed signals about Sylvia Burwell, Obama’s nominee to replace Kathleen Sebelius as HHS Secretary.  According to Politico:

Cursorily, she looks very good, but she’s going to have to answer some really tough questions, is all I can say,” said Sen. Orrin Hatch of Utah, the top Republican on the Senate Finance Committee, which must vote on Burwell’s nomination before it can go to the Senate floor.

Though Republicans are making Obamacare a centerpiece of their bid to regain control of the Senate, some lawmakers say there’s a difference between their opposing the law and fighting Burwell personally.

“She’s not the one to go after [over] the policy or ideological differences,” said Sen. Richard Burr (R-N.C.), another Finance Committee member. “She’s got to go in and try to run the place. I’m much more concerned that she’s up to snuff on [public health preparedness and the National Institutes of Health] — things where the secretary can have a real impact.”

Sen. Burr suggests that its either policy and ideology or competence.  Um, it can’t be both?  If the so-called “tough questions” only deal with her competence, Republicans are missing some big opportunities to punch more holes in ObamaCare.  There are eleven Republicans on the Senate Finance Committee and ten on the Senate HELP Committee (where Burwell will have her confirmation hearings).  Surely 21 Senators is enough to both probe her competence and ask her questions such as:

-Will you define today your understanding of the following terms and distinguish them from one another for us:  “signed up”; “enrolled”; “paid”; and “insured”?

-Going forward, will you commit today to put any of your proposed changes, delays, etc. before Congress before asking the President to take executive action?

-A large amount of money has been spent employing or contracting with so-called “navigators” to help people enroll in the exchanges. Would you please, first, quantify how much money has been spent and how many people employed, and, second, how will these people spend their time between now and the next open enrollment period?

-If confirmed, will you promise to provide Congress a full accounting of money paid to each web-site contractor within 30 days of taking office, including how much is still owed?

While committee hearings are nominally for the purpose of gathering information, they’ve increasingly become used to score political points.  Republicans need to acknowledge that and use some of their time in that hearing to launch attacks against ObamaCare.  If they don’t, then they aren’t doing their job fighting for liberty.