ConservativeBlog.org
Posted at 01:52h in Blog, Health by David Hogberg

1. Only Two-Thirds Of Exchange Enrollees Have Paid First Premium, But…  New research released by Republicans on the House Energy and Commerce Committee shows that only 67 percent of people who have signed up on the federal exchanges have paid their first premium (the number doesn’t include state exchanges).

However, the Democrats on the Committee make a valid point about the Republicans’ research, namely that the deadline for paying the first premiums has not yet arrived for many enrollees:

As of April 15, premiums had only come due for individuals who had signed up for coverage before March 15. Five million individuals had enrolled in coverage through the marketplaces as of March 17. On April 17, the President announced that 8 million Americans had signed up for coverage through the marketplaces. That means that more than 3 million enrollees – or nearly 40% of all enrollees – did not have premiums due by April 15 and therefore  were not required to have paid them by that point.

Democrats also point out that many insurers have thus far reported lower percentage of people who have not paid their first premium, between 80 percent and 90 percent.

But doing the math shows ObamaCare supporters should still be worried.  First, I assume that 33 percent of total sign-ups had not paid their premiums by April 15 and assumed that 20 percent of the 5 million who signed up by March 15 had paid their premiums.  That means that of the 3 million who signed up since March 15, 55 percent, or 1.64 million had not paid their first premium. (The full math is at the end of the post.)  The sign-ups in the last month have a long way to go before their enrollment numbers are similar to those who signed up on March 15 or before.

2. At Least ObamaCare Supporters Are Admitting That The Eight Million Figure Is Baloney.  As noted above, Democrats on E&C have conceded that some people on the exchange have not paid their first premium, which means that the 8 million number is not an accurate count of actual enrollees.  A blog at Daily KOS on this subject notes the same thing.  From here on out, you can be sure that every time ObamaCare supporters use the 8 million figure they’ll follow it with the caveat that these are sign-ups and not necessarily enrollees. 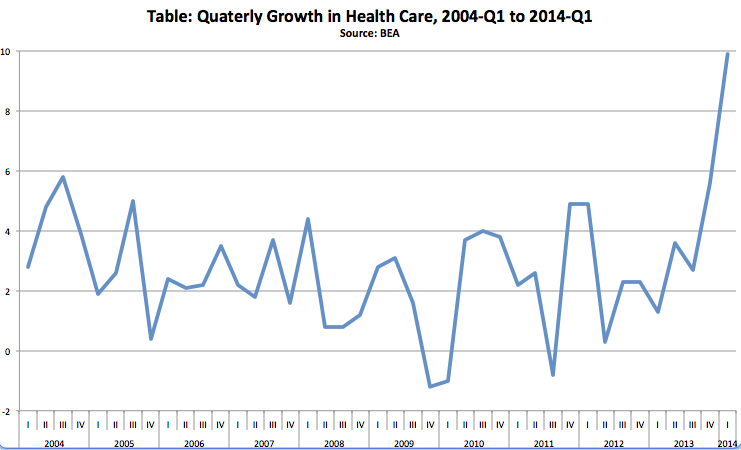 It didn’t take long for supporters of the Affordable Care Act to change their tune on the benefits of increased health-care spending.  Think Progress’ Igor Volsky wrote, “All of this was fully expected,” and that the spending just reflected the fact that more Americans “are finally getting insurance and are using their care.”

Oddly, the same publication lamented less than four months ago that Obamacare didn’t get enough credit for keeping spending increases down in 2012. “According to CMS, the spending growth between 2009 and 2012 is the lowest ever recorded in the past five decades,” wrote Tara Culp-Ressler in early January, “and 2012 is the first time in more than a decade that health spending grew more slowly than the U.S. economy.” She complained, “The CMS’ report isn’t giving the Affordable Care Act much credit” for keeping increases limited, as CMS attributed the slowdown to the economic malaise of the so-called recovery.

4. And On A Funny Note.  John Oliver did a bit on Cover Oregon.  Warning: Strong Language.