ConservativeBlog.org
Posted at 01:47h in Articles, Blog by Amy Ridenour

If you were the president and publisher of the Journal News, the newspaper that a year ago published the names and home addresses of legally-registered handgun owners in two New York counties on an interactive map, would you send out this tweet to your followers, and end forever in the public mind any question that you were objective on gun issues? 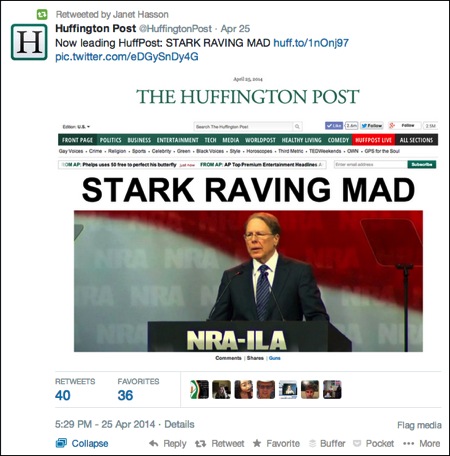 This week, two National Center staffers, myself and Jeff Stier, attended the shareholder meetings of two major media companies: Gannett, owner and ultimate publisher of the Journal News, as well as America’s most popular newspaper, USA Today, and many other media properties, and the New York Times.

I brought up the gun map, and the tweet, at Gannett, and Jeff asked Arthur O. Sulzberger, Jr. to add some genuinely conservative columnists to the Times editorial page.

We’ll be issuing a press release Friday morning describing the responses we received at each company. Stay tuned.

Update: Here it is.