06 May 2014 Has the SEIU Changed Its Mind About the Tea Party Being Racist?

ConservativeBlog.org
Posted at 15:46h in Articles, Blog by David Ridenour 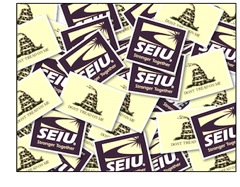 I heard a radio ad this morning this morning that attempted to show that support for the SEIU’s demand for pay hikes of up to 40% for employees at Johns Hopkins Hospital is broad-based by including a quote from a worker identifying himself as a “Tea Party Republican” in support of the demand.

Wasn’t it the SEIU that was said to have assaulted black Tea Party member Kenneth Gladney at a town hall in St. Louis a few years back?

Was this supposed “Tea Party Republican” forced to say these things in SEIU propaganda materials, much like the Vietcong forced captured American GIs to admit to committing atrocities against the people of Vietnam?

Since the ad was on radio, I can’t really tell whether he was blinking “t-o-r-t-u-r-e” in Morse code as the late Jeremiah Denton did in 1966.

Isn’t this the same SEIU that has repeatedly accused the Tea Party of being racist, calling one Tea Party group’s campaign to stop voter fraud “an innovative tactic in suffrage suppression reminiscent of the days of Jim Crow” and accusing the Tea Party of “threatening calls, racist taunts and dangerous behavior…”

All this leaves us with several options…

1. The SEIU was lying when it suggested that the Tea Party movement is racist.

2. The SEIU was telling the truth about the racism of the Tea Party movement, but is okay with it so long as it helps them get more money.

3. The “Tea Party” spokesman the SEIU used wasn’t a member of the Tea Party at all.

My money is on option 5.