08 May 2014 If Politicians Care About Liberty, They Need To Fight For It–And Too Many Republicans On The E&C Committee Don’t Know How To Do It

ConservativeBlog.org
Posted at 15:09h in Blog, Health by David Hogberg

A little over a week ago I wrote, “Alas, the GOP is not called the stupid party for nothing.  If Republicans are really serious about restoring liberty in health care, then they need better tactics than talking without first thinking and preemptive surrender.” 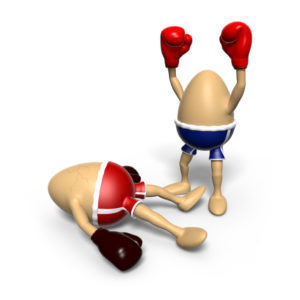 Two eggs were boxing. One egg lies down on the ground with cracks on it’s shell, while the one’s celebrating it’s victory.

ObamaCare enrollment. Watching it wasn’t painful.  It was excruciating.

Republicans let the Democrats walk all over them.  The Democrats touted the “8 million enrolled” figure unchallenged, even though the insurance industry officials brought up to testify said between 10 and 20 percent of pre-March sign-ups had not paid their premiums.  I never heard one Republican counter with something like, “Well, if 10 to 20 percent don’t end up paying their premiums, we aren’t going to have 8 million enrollees, are we?  Indeed, if it closer to 20 percent, then the final number won’t even reach Obama’s goal of 7 million.” Granted, I stopped listening three-quarters of the way through, but I’d bet good money no GOP member said anything like that in the part I missed.

As usual, the Democrats’ attack dog, Henry Waxman, laid down an effective barrage of things that the GOP had been wrong about on ObamaCare.  It was effective, in part, because no one fired back.  For example, Waxman dismissed the GOP claim that ObamaCare would cost jobs.  Someone should have pointed out the Congressional Budget Office report that said ObamaCare would reduce work hours to the equivalent of 2.5 million jobs.  Waxman also claimed that the premiums on the exchange had come in lower than the CBO estimate.  Couldn’t one of the Republican members noted that the premiums are much higher than what was available on the actual individual market in 2013?

As I wrote in that same post a week ago, “While committee hearings are nominally for the purpose of gathering information, they’ve increasingly become used to score political points.  Republicans need to acknowledge that and use some of their time in that hearing to launch attacks against ObamaCare.”

Time for GOP members of the E&C Committee to step up their game.  A lot.

On a different note, yesterday I commented on the phenomena of “duplicates” in the exchange.  Duplicates are individuals who, due to website glitches, signed-up more than one time.  Yesterday I wrote, “If only 80 percent of enrollees pay premiums, then enrollment will be around 6.4 million, not 8 million.  The number of duplicates (and we don’t know how many duplicates there are) will further erode that number.”

Upon further reflection, the number of duplicates won’t further erode the enrollment number because they are already part of the rate of non-payment of premiums.  In other words, suppose Mr. Smith opened three accounts, signed up for insurance in all three, but is paying a premium on only one.  The insurers are receiving no premiums for the two “duplicate” sign-ups, and thus the duplicates are probably included in the total number of sign-ups who have not paid their premiums.