ConservativeBlog.org
Posted at 13:23h in Blog, Health by David Hogberg

New evidence further strengthens the case that the ObamaCare exchanges are headed for a death spiral.

First, a new McKinsey report confirms that the young invincibles (or, at least the 18-29-year-old portion of them) are the least likely among all age groups to have paid their first premium (p.6): 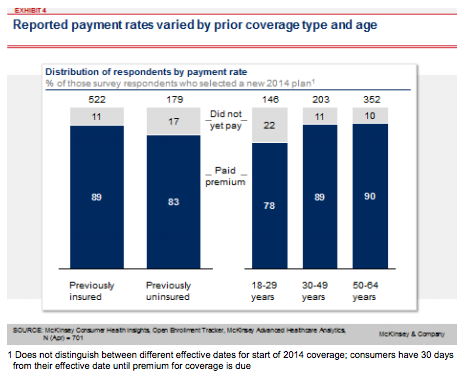 As I’ve noted before, the 18-34-year-olds will probably account for a disproportionate share of the group that does not pay their premiums.  That means the crucial 18-34-year-old demographic will be even smaller than the 28 percent of exchange sign-ups recently reported by HHS.  As that number decreases, the risk of a death spiral increases.  (For even more on the age imbalance of the exchanges in certain states, see this American Action Forum report.)

Next, a few insurers are releasing their rate hikes for next year.  From Virginia:

…the Anthem HealthKeepers Inc. plan offered by a unit of WellPoint Inc. said it would raise premiums by an average of 8.5% across its individual plans in Virginia, which cover about 110,000 people and are sold on the online insurance exchange set up by the health law, as well as directly to consumers.

….The Virginia filings show other health plans proposing rate increases ranging from 3.3% for Kaiser Foundation Health Plan of the Mid-Atlantic States, Inc., with around 10,000 members in the state, to 14.9% for CareFirst BlueChoice Inc., which said it had about 32,000 members. CareFirst said in its filing that it had seen the average age of its enrollees rise by several years. Neither WellPoint nor Kaiser immediately commented Sunday.

Molina Healthcare (MOH), with 2,000 enrollees in Washington, aims to cut premiums by 6.8%. Kaiser Foundation Health Plan seeks just a 0.6% rise. But those carriers account for just 3% of state’s combined enrollment.

Meanwhile, Group Health Cooperative filed for an 11.2% rate increase for its nearly 24,000 exchange enrollees, about 16% of Washington’s total.

Weighting proposed rates by the size of the exchange operator suggests an average 8.8% hike.

Are those the types of increases that will likely drive younger and healthier people to leave the exchanges?  Only time will tell, but the fact that these increase are considerably higher than inflation (thus far about 1.77 percent in 2014) is a bad sign.

Another bad sign is the overall health of exchange enrollees.  Here are the results of a survey from Gallup:

Among the all U.S. adults, 50 percent report they are either in excellent or very good health.  The corresponding percentage for exchange enrollees is 37.

That problem is showing itself in North Carolina:

“Not as many of the state’s young and healthy enrolled as expected,” Blue Cross Blue Shield of North Carolina announced in a press release. The company expected 50 percent of its Obamacare exchange customers to be younger than 35, but just 32 percent of customers are below age 35 and just 25 percent are between the ages of 18 and 34.

….Even worse, the insurer believes that its few young invincible sign-ups are less healthy than expected as well.

“Early self-reported data indicates that BCBSNC’s young ACA customers (ages 18-34) are less healthy and seeking more medical treatment than we typically see in this age group,” according to the statement.

Blue Cross of North Carolina probably won’t be the last insurer faced with this problem.

When ObamaCare critics, myself included, talked about not enough young and healthy signing up, we too often used young as synonymous with healthy because young people usually are healthier.  But the viability of a health insurance risk pool depends on enough healthy people signing up.  And the big problem for the ObamaCare exchanges is that they may actually be attracting young people who are less healthy on average.