ConservativeBlog.org
Posted at 12:59h in Blog, Health by David Hogberg
A few weeks ago, I came across this blog post at KevinMD about one physician’s experience working in Sweden’s single-payer system:
There was, in my view, a culture of giving less than you were able to, a lack of urgency, and a patient-unfriendly set of barriers. One example: Most clinics took phone calls only for an hour or two in the morning. After that, there was no patient access; no additions were made to providers’ schedules, even if some patients didn’t keep their appointments, not that there was a way to call and make a same-day cancellation. 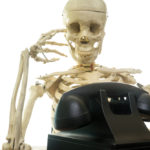 That jogged my memory and after some searching I found this diary by Patricia Balsom who was dying of cancer while under the “care” of Britain’s National Health Service.  Here are a few excerpts:
Left leg started to swell around 7.45pm. Called the out-of-hours doctor service. Two hours later we called again. The girl on the phone said she thought we just wanted advice, as this was a line for seriously ill patients. We told her I was terminally ill. She asked if we needed a doctor, and we asked her if she was medically qualified. She said she was not.
That was not her only “phone” difficulty:
We called at 9am about my blood tests. A district nurse came and took blood at 10.45am. She insisted that Mick took the blood sample to Hillingdon Hospital because she “didn’t have time” to take it herself. (What if I was alone and we didn’t have a car?) She told me the hospital would contact me in the afternoon with the results. Didn’t explain what I was supposed to do with them. Waited all afternoon and evening, and no call came.
How well an entity fields phone calls is a pretty basic standard of quality.  Businesses that answer calls promptly or return them in a timely fashion usually get good marks from customers.  It appears that single-payer systems fail even that basic test.
And here are some of Mrs. Balsom’s final thoughts on the NHS:
I feel Hillingdon Hospital are making whatever time I have left so much more stressful than it need be. They are cheating me out of quality time with people I care about….I don’t feel as if anyone in the NHS is really in charge of my case.
Read it all.