ConservativeBlog.org
Posted at 07:30h in Blog, Health by David Hogberg
Reading over defenses of the Dept. of Veterans Affairs has me wondering if there is ever any reason in the mind of a liberal to turn a government program over to the private sector?  In this particular case dozens of veterans died, so maybe that calls for some drastic changes.  Not according to Suzanne Gordon:

It is of course unacceptable if patients suffered as a result of any delays. But regardless of what went wrong at any VA facility, turning veterans over to private sector insurers and for-profit hospitals is not the solution.

It seems that privatization would be exactly the answer to reduce waiting times for treatment.  After all, how often do you hear about people who have private insurance and go to private hospitals waiting months for treatment? 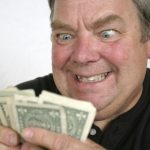 Reading further, I also must wonder is there is ever a crisis in government that, in the liberal mind, doesn’t call out for more funding?

If some waited too long to be seen, maybe it’s time for Congress and the White House to figure out how to free up funds to care for veterans who are living longer with more complex conditions.

But is the VA really underfunded? Let’s look at some of the evidence.

Back in 2000, before the wars in Afghanistan and Iraq, the taxpayers spent just over $47 billion on the VA.  By 2012 taxpayers spent over $124 billion.  That’s an increase, after inflation, of 98 percent.  (To check my math, download Table 4.1 here.  Inflation calculator here.)

That, however, is spending for the entire Dept. of Veteran’s Affairs and not the Veterans Health Administration, where the problem is.  To get a better look at that, go here and download the file for “Average Expenditures Per Patient by Healthcare Priority Group:  FY2000 to FY2012.”  The VA groups puts patients into priority groups for treatment based on their health status.  An explanation of the groups can be found here.  Below is a table of the real change in spending per capita on groups one to seven from 2000 to 2012. 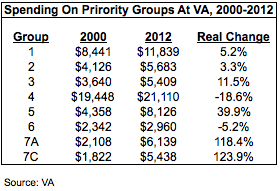 While that paints something of a mixed picture, it tends to show more spending increases than decreases.  The bottom line is that the data doesn’t support a “Congress doesn’t spend enough” explanation of the scandal.

One final point:  Note these two phrases Gordon uses: “If some waited too long to be seen” and “It is of course unacceptable if patients suffered as a result of any delays.”  If?