ConservativeBlog.org
Posted at 07:17h in Blog, Health by David Hogberg

As noted below, the new report from the Dept. of Health and Human Services shows ObamaCare is likely headed for a death spiral.  The study also reveals that ObamaCare has increased insurance premiums.

The report states that the “national average for the second-lowest cost silver plan premium rate is $226 per month for a 27-year-old, ranging between a low of $127 to a high of $406.” Research by Heritage’s Drew Gonshoronski shows that the average premium in the individual market for all policies for 27-year-olds in 2013 was about $168.  The range was $87 to $500.  Remove New York with its community rating and guaranteed issue laws, and the top of the range is $329.

A new study by Avik Roy of the Manhattan Institute does a county-by-county breakdown of the premiums costs and found that they are, on average 49 percent higher than in 2013.

The HHS report also notes that…

…the amount that a 27-year-old woman with an income of $25,000 (218 percent of the FPL) would pay for the second-lowest cost silver plan is capped at $145 per month.  If she lived in Jackson, Mississippi, the premiums for the second-lowest cost silver plan available would cost her $336 per month before tax credits. Therefore, the amount of the premium tax credit would be $191 per month.  She could apply the $191 per month tax credit toward any plan of her choosing in any metal level. By applying her tax credit to the lowest-cost bronze plan in Jackson, which is priced at $199 per month, she could obtain Marketplace coverage for just $8 per month after tax credits.

If she receives a tax credit premium subsidy.  If not, then her lowest-cost option is a $150 catastrophic plan.  A National Policy Analysis I authored shows that in 2013 that 27-year-old woman had 26 cheaper options on eHealthinsurance.com and 14 cheaper options on Finder.healthcare.gov (Finder).  For people who receive no premium subsidy or a very small one, premiums on the exchanges are higher than they were in the individual market in 2013.

The report also tries to boost the choice aspect of the exchange by claiming that on average “consumers shopping in the Marketplace can choose from approximately 47 Marketplace plans,” and that there “were a total of 266 issuers by state offering Marketplace plans, ranging from a low of one issuer in New Hampshire and West Virginia to a high of 16 issuers in New York.”

Research by Ed Haislmaier of Heritage shows that 360 insurance issuers participated in the individual market in 2013—94 more than are on the exchange.  The range was better as well, with 18 issuers in Texas and Florida and 2 for Hawaii, Montana, New Hampshire and Rhode Island. 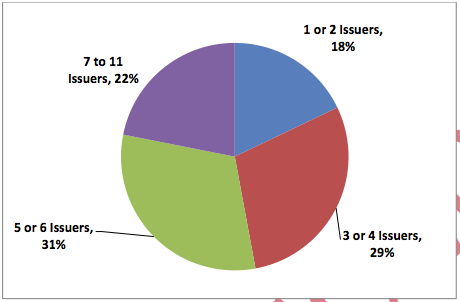 HHS says this “compares favorably with those covered by employer-sponsored insurance.” Maybe, but that’s apples versus oranges. How does it stack up with the individual market in 2013? That comparison would tell us if the exchanges are improving choice or not.

As of right now, I’m unaware of any analysis that looked at the numbers this way for 2013. If you know of any, let me know.