21 Jun 2014 Who Does Washington Fear More… Americans, or Foreign Aggressors? 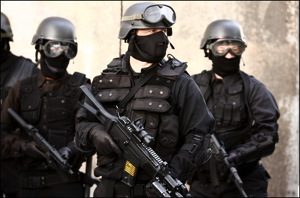 At the same time, the federal government is arming up against citizens.

In 2008, according to the “Census of Federal Law Enforcement Officers,” there were 120,000 federal employees in 73 agencies authorized to carry guns and make arrests. That was an increase of 12.5% in just four years.

We don’t know exactly how many such employees there are today because the every two-year census that started back in 1993 suddenly stopped during the Obama Administration.

When asked why the Census was discontinued, a Justice Department spokesperson said, “Due to available resources and staff we have delayed a number of projects, the Census of Federal Law Enforcement agencies being one.”

Justice did, however, find resources to conduct several studies relating to guns last year as it was pushing for more stringent gun control laws.

Even without a more recent Census of Federal Law Enforcement Officers, it is clear that the number of armed federal employees has grown. According to the Census’ “Annual Survey of Public Employment and Payroll Summary Report: 2012,” there were 192,354 federal employees involved in “police protection.” Though this number includes employees who are not sworn officers, including lab technicians, dispatchers and the like, historical data suggests that sworn officers constitute two-thirds of this number, putting the number of full-time armed employees at around 129,000 as of 2012 and likely even more today. That’s nearly a third the size of the Obama Administration’s proposed Army strength. And bear in mind that this number does not count state, county and local officers.

If we want to demilitarize, perhaps we should start at home.