24 Jun 2014 The U.S. Supreme Court Should Stop Keeping Secret What Cases It is Handing Down and When 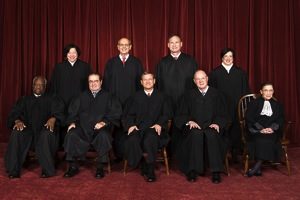 Far be it for me to criticize the U.S. Supreme Court, which has ways many and sundry of communicating that its members are superior to those of us who are (so it thinks) mere peons in comparison, but why must the public go through, every year, the suspense of waiting until the Court hands down decisions to find out which decisions it is handing down?

It’s obnoxious, that’s what it is.

I realize many people are content to wait to learn to decision of the court on the news, but many others — the parties to the cases, attorneys, reporters, government officials and policy analysts like myself — have specific work to do when certain cases are handed down. Yet we aren’t allowed to schedule that work in advance because the court doesn’t have the simple courtesy to give advance notice: “Monday we will be handing down Jarndyce v. Jarndyce.”

Heck, even to post on the court website the night before what is scheduled for morning release would be better than the current situation, in which thousands of people repeatedly set aside time to deal with, report upon or analyze the aftermath of Jarndyce v. Jarndyce, only to find the court instead has handed down a decision on Argentinian bonds.

And for their part, how many Jarndyce v. Jarndyces did the Argentinians have to sit through, waiting for their decision?

There’s no reason the court can’t tell us what decisions will be handed down when once it knows, and don’t tell me “tradition.” That might get me started on some of the other “traditions” of the court, one of which was “corruption.” Hopefully we gave that one up.

My belief is that the justices enjoy being the only ones in the know. It’s really impossible to watch the rude way they treat attorneys in the court without recognizing that a few of them have gotten way too big for their gowns.

Oh, and the part I said about “far be it for me to criticize the U.S. Supreme Court”? If you haven’t noticed by now, I take that back. In addition to making more than one bazonkas decision, and interrupting the lawyers too much, and jerking people around as to when specific decisions will be handed down, the Court should allow cameras in the courtroom so we the people can watch and hear the arguments as they are made in real time, as well as the interruptions, excuse me, questions, made by the justices.

Doing so would help educate people about the arguments made in cases. Transcripts of oral arguments are good and appreciated, but let’s face it, many people (inexplicably) avoid reading. It’s not good of them, but it is true. And much of the news media ignores aspects of stories if there’s no footage. Ratings, you know.

I wrote an article on this in the Ft. Lauderdale Sun-Sentinel in 2000 when the court was hearing arguments in Bush v. Gore. Public interest in that case was a wee bit high, but we mere peons in the public weren’t allowed to watch. Might discomfit our betters.

Maybe if the public had been able to watch, more people would have understood the issues grappled with, and fewer would have been bitter at the result. I don’t know how many times in the intervening 14 years I’ve read comments by bitter Gore partisans about that case — comments that made it clear they did not understand the issues (other than the presidential race) on the table.

My take: Who cares if Justice Souter wanted to go to the supermarket without being recognized? He quit anyway.

P.S. Here is a group circulating a petition to the Chief Justice asking for cameras in the courtroom.