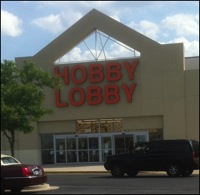 Here’s hoping that when the U.S. Supreme Court hands down Burwell (formerly Sebelius) v. Hobby Lobby Stores, Inc. and Conestoga Wood Specialties Corp. v. Burwell on, presumably, Monday, it not only delivers a resounding victory for Hobby Lobby/Conestoga Woods by a 9-0 margin (I actually predict 6-3), but bases the victory not just on the Religious Freedom Restoration Act, but the First Amendment itself.

That way, if the Religious Freedom Restoration Act is ever repealed (which is not, alas, farfetched), we won’t have to re-litigate the freedom to not be forced to help others commit abortion against our will.

Not being forced to participate in an abortion is an absolute right, not one that should be seen as owing its existence to transitory statutory law.

Victories for freedom should be permanent ones. Better a 5-4 decision that includes the First Amendment than a 9-0 on RFRA alone.