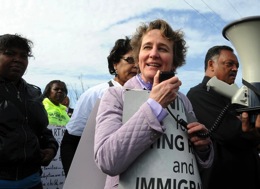 Nearly all eyes turned toward the Supreme Court tomorrow are focused on the combined Hobby Lobby/Conestoga Woods cases — but two First Amendment-related decisions are to be handed down tomorrow, and the one few people have heard about could be just as big.

I write “especially keenly,” because of course whenever a public sector union successfully makes a demand, the public feels it in some form.

The union considers this lobbying to be a form of collective bargaining, because the workers will be paid more if certain Medicaid reimbursement rates are increased.

Some of the affected workers, however, oppose expanded Medicaid reimbursement rates because of the burden it places on the public. These individuals believe that being forced to pay their “fair share” of what the union considers collective bargaining is in fact a violation of their First Amendment free speech rights. They say the union is forcing them to lobby for a change in Medicaid policy with which they disagree.

Why This Matters – Big Time

An intriguing aspect of Harris v. Quinn is that while the public policy nature of the issues in which the union has engaged itself here are especially keen, it is undeniable that every collective bargaining action by a public sector union has some public policy impact.

Thus, any government employee who is forced to contribute to a public sector union to offset its collective bargaining expenses could make the same claim as the disgruntled workers in Harris v. Quinn: Why should I be compelled to make political speech with which I disagree?

In 1977, the Supreme Court examined this question when Detroit public school teachers, forced to pay service charges to a teachers union equal to the amount of dues, objected to the union’s use of a portion of their service charges for expressly political purposes, such as support for specific candidates for public office. The high court, in Abood v. Detroit Board of Education, ruled then that the union could charge non-members service fees for collective bargaining activities, but could not charge them for expressly political or ideological work.

The Obama Administration, unsurprisingly, argued before the court in Harris v. Quinn that the protections afforded workers by the compromise arrangement made in Abood is sufficient to safeguard the workers’ First Amendment rights.

The plaintiffs in Harris v. Quinn, who do not support the union’s views toward Medicaid expansion, disagree. They say they don’t care that the union considers lobbying for Medicaid expansion to be part of its collective bargaining duties; as far as they are concerned, the union is engaging in political speech with which they disagree, and they don’t want to be forced to help pay for it.

If the high court rules in favor of the petitioners tomorrow, a huge change in U.S. labor law is possible — one that results in public sector unions losing access to mandatory service fees from workers who chose not to join a union, but who still must pay for their share of that union’s collective bargaining activities.

If that happens, expect to hear MAJOR screaming and protesting from unions.

Intriguingly, rumor has it that Justice Alito is writing the majority opinion in this case. In the oral arguments, Justice Alito equated a teachers union’s ability to force a teacher to contribute to causes with which he or she disagrees as a condition of employment to an ability by unions to deny a person’s right to become a teacher. So we can probably assume he’s sensitive to the rights of public workers to be employed without donating against his or her will to political causes.

And even more intriguingly, the court scheduled the release of Harris v. Quinn for the last day of the term — the evening of which justices can go out of town, where it is harder for unions to find them for protests.

Harris v. Quinn came about as a result of what many consider to be a union overreach, as public sector unions sought to unionize people who in many cases are employed by a member of their own families, not the government. If the case results in all public sector workers being released from paying compulsory service fees nationally — still a longshot, admittedly — it will turn out to have been the most ill-advised overreach in the history of organized labor.