01 Jul 2014 On 50th Anniversary of Civil Rights Act, Crazed Anti-Hobby Lobby Activists Claim it is a Civil Rights Act Violation to Not Give Women Something that is Not Being Given to Men 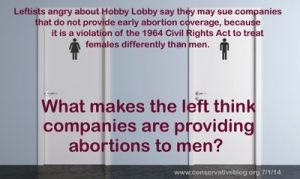 Left-wing opponents of yesterday’s Hobby Lobby decision are suggesting that companies that decline for religious reasons to provide early abortion drugs and devices could be sued under Title VII of the Civil Rights Act, which prohibits employment discrimination on the basis of sex, race, color, national origin, or religion:

The HHS mandate requires that employers provide female employees with coverage, without co-pays, for contraception, sterilization and early abortion drugs and devices. 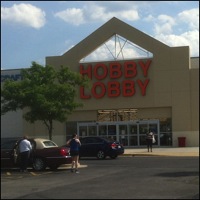 Now obviously males can’t have abortions, so it is impossible for employers to cover this for males and not females, but they can use contraception and they can get sterilized. The HHS mandate does not cover males for any of this. Under the mandate, for example, a (female) tubal ligation is covered, while a (male) vasectomy is not.

Birth control pills are covered, but condoms (despite their significant side benefit in helping to prevent the spread of disease) are not.

If anything or anyone in this situation is in violation of Title VII of the Civil Rights Act, it is the HHS mandate itself and its backers, such as President Obama and the left-wing groups, not those who wished to receive a partial exemption from it.

Even if that were not so, the Civil Rights Act’s Section VII says, flat-out, “This subsection shall not require an employer to pay for health insurance benefits for abortion…”

And yet another cog in the left’s scheme: case law saying businesses can’t be required to provide abortion services against their sincerely-held religious beliefs. The cite on that? A case called Burwell v. Hobby Lobby Stores, Inc…