ConservativeBlog.org
Posted at 03:33h in Articles, Blog by Amy Ridenour 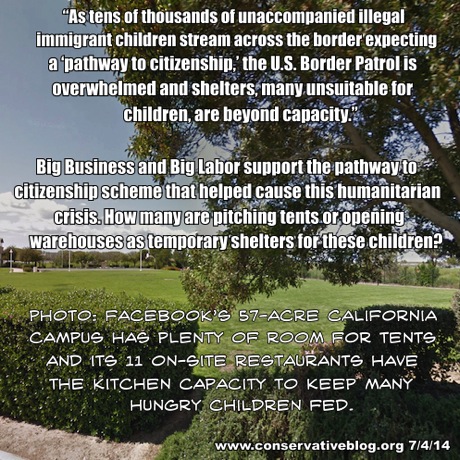 Facebook founder and CEO Jeff Zuckerberg founded FWD.us, a group that lobbies Congress for “a pathway to citizenship for 11 million undocumented immigrants.”

Hopes of U.S. citizenship, or legal status, is a key factor spurring parents south of the border to send their unaccompanied minor children on the dangerous trip across the border. Some children have died; others have been assaulted. Many are traumatized.

According to Moni Basu, reporting for CNN, the influx of children, which may rise to 130,000 more next year, has

“…overwhelmed U.S. facilities along the border and forced federal authorities to scramble to find viable solutions.

They’ve had to open temporary shelters because the existing ones are filled to capacity. Journalists are not allowed inside, but leaked photographs of a Border Patrol holding facility in Nogales, Arizona, show cramped cells without enough food, beds, toilets or showers. They seem more befitting of refugee camps Americans hear of in war-ravaged regions of the developing world than right here at home.

From those less-than-ideal conditions have risen allegations of sexual abuse, threats of violence, strip searches and filthy conditions.

A complaint filed Wednesday by the American Civil Liberties Union and four immigrant rights groups lists accusations made by 116 children. Half described a lack of medical care. Others describe ice-cold holding cells in which bright fluorescent lights were kept switched on day and night. About 70 percent of these children said they were held by the Border Patrol longer than the statutory limit of 72 hours.”

Big Business and Big Labor should accept that they are contributors to this crisis, and act accordingly.