ConservativeBlog.org
Posted at 03:16h in Articles, Blog by Amy Ridenour 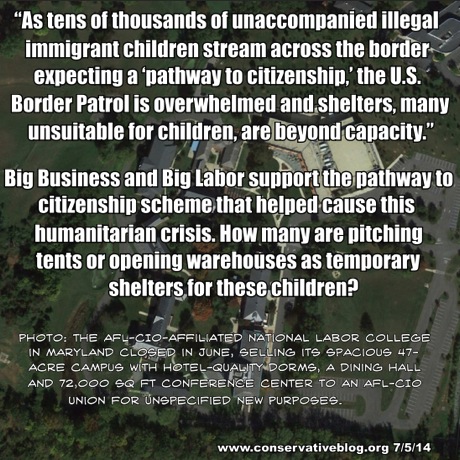 Just about a month ago, AFL-CIO President Richard Trumka called upon President Obama to issue green cards to everyone eligible for citizenship under the Senate immigration bill, which gives legal status to illegal aliens already here:

…the executive branch must provide all those who would qualify for citizenship under the bipartisan Senate Bill affirmative status with work authorization… – Richard Trumka, May 28, 2014

The AFL-CIO has made three immigration policy recommendations to the federal government:

1) Give legal status with work authorization to everyone who is a “low priority for removal” or “eligible for prosecutorial discretion under existing [Department of Homeland Security] policies;

2) The Department of Homeland Security should attempt to block state and local enforcement of immigration laws;

3) The Department of Homeland Security should stop “criminalizing” immigrant communities and ensure that no one in recommendation #1 (almost every illegal alien) is deported.

DHS, of course, does not create laws, so it “criminalizes” no one. Breaking the law does that.

The AFL-CIO claims it supports citizenship for 11 million (most likely more) illegal aliens because illegal workers can be abused by unscrupulous employers, but one does not have to be a citizen to be a legal resident with a green card. If the AFL-CIO’s true interest was as it claims, it would focus on green cards and not citizenship. If, on the other hand, the AFL-CIO is looking to recruit new voters…

The AFL-CIO has explicitly rejected a plan to allow illegal aliens to stay here and work legally, and Trumka has said legislation of that sort would not only fail to receive union support, but would be aggressively fought by the AFL-CIO.

The AFL-CIO is contributing to the impression that anyone who makes it to the United States, and soon, may get citizenship. If it is as humanitarian as it claims to be, it will step up and help some of the innocent children who came here because they, or more likely their parents, believe that.

Big Labor and Big Business have contributed to the humanitarian crisis affecting children on our border. As long as government agencies are overwhelmed, business and labor should step up to help by temporarily contributing food and shelter to those who need it.