ConservativeBlog.org
Posted at 02:46h in Articles, Blog by Amy Ridenour 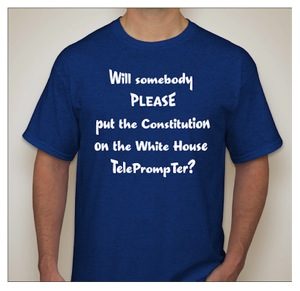 Lefties including MSNBC’s Ed Schultz, PBS NewsHour, the Washington Post’s Wonkblog and PostPartisan columns, Newsweek and others have ludicrously been trying to defend all of Obama’s unconstitutional actions by saying Obama has issued fewer executive orders than Bush.

This is a red herring, because the number of executive orders President Obama has signed is irrelevant.

This is what is relevant:

The man is doing his job backward.

Here are three reasons why the American public won’t buy the left-wing excuse that the number of executive orders issued is the key issue here:

TWO: Obama doesn’t need to issue an executive order to seize power he doesn’t have or to fail to enforce the laws he swore an oath to uphold. A few examples:

The Constitution has no “borrow power” provision, and in any case, with a 17.5 trillion dollar debt, Obama’s done enough borrowing.

The American public is too smart to accept the left-wing claim that Obama can violate the Constitution and his oath of office anytime he pleases, just as long as he issues fewer executive orders overall than did George W. Bush.

The wonder isn’t that the Speaker of the House is planning to sue; the sick wonder is that so many left-wing Americans don’t give a darn about the Constitution. One wonders what sort of government it is that the left would prefer to live with.