13 Jul 2014 Crisis on the Border: Where are Zuckerberg, Trumka and Bloomberg Now?

ConservativeBlog.org
Posted at 02:10h in Articles, Blog by Amy Ridenour 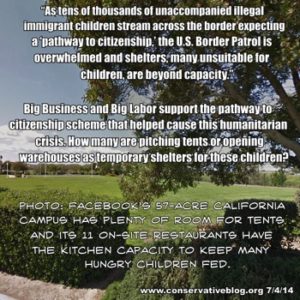 Victor Davis Hanson is hitting some of the same points I made last weekend, specifically, the moral obligation of wealthy amnesty-advocates to help the kids who are crossing our southern border.

“…the CEOs of Silicon Valley and Wall Street who want cheap labor from south of the border assume that their own offspring’s private academies will not be affected by thousands of undocumented immigrants, that their own neighborhoods will remain non-integrated, and that their own medical services and specialists’ waiting rooms will not be made available to the poor arrivals.

Have immigration-reform advocates such as Mark Zuckerberg or Michael Bloomberg offered one of their mansions as a temporary shelter for needy Central American immigrants? Couldn’t Yale or Stanford welcome homeless immigrants into their now under-occupied summertime dorms? Why aren’t elite academies such as Sidwell Friends or the Menlo School offering their gymnasia as places of refuge for tens of thousands of school-age Central Americans? 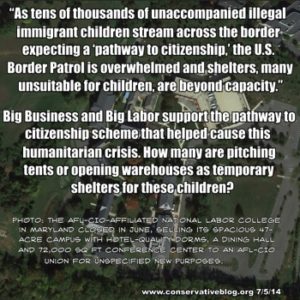 What a strange, selfish, and callous alliance of rich corporate grandees, cynical left-wing politicians, and ethnic chauvinists who have conspired to erode U.S. law for their own narrow interests, all the while smearing those who object as xenophobes, racists, and nativists.

How did such immoral special interests hijack U.S. immigration law and arbitrarily decide for 300 million Americans who earns entry into America, under what conditions, and from where?”

There’s a lot more in Hanson’s piece, which is worth reading.

In the meantime, last I heard, the Facebook campus still had 11 restaurants capable of feeding kids and plenty of yard room for pitching tents, and the AFL-CIO has an apparently empty campus in Silver Spring, MD with dorms, dining facilities, a 72,000 square foot conference center and nearly 47 acres of additional space for tents.

I wonder how many cots could fit in a 72,000 square foot conference center…