ConservativeBlog.org
Posted at 01:48h in Blog, Health by David Hogberg

Phillip Longman’s book Best Care Anywhere: Why VA Health Care Is Better Than Yours contributed to the current VA scandal by creating a sense of complacency among those in the Congress and the Obama Administration who were charged with overseeing the VA.  Unfortunately the notion that the VA was the crown jewel of the U.S. health care system wasn’t the only bad idea to come out of that book.

The Obama Administration’s attempt to impose electronic health records on the health care system and the resulting mess also found its origins in Longman’s book.  Longman championed the Veterans Health Information Systems and Technology Architecture (VistA) as a wonderful tool for coordinating patient care and used the last portion of his book to advocate for adoption of VistA by the entire medical community.

Longman’s story of the development of the VistA system was a description of a “bottom up” process.  In Best Care Anywhere Longman recounts the efforts of various programmers and physicians in the VA to develop the VistA system.  While the VA bureaucracy was constantly trying to stymie their efforts, they “had one crucial advantage,” according to Longman.  ”[T]hey were creating software either for their own use or for their colleagues.” VistA would prove useful for the VA because it was being created and tested by VA personell.  It was a process of trial and error that involved the people who would be using the product on a regular basis. 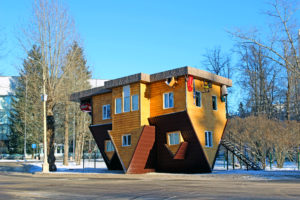 MOSCOW – JANUARY 28: Upside down house in the Russian Exhibition Center on January 28, 2014 in Moscow

So, when later in the book Longman proposes that the entire U.S. health system should adopt VistA, what approach does he suggest?  Why “top down,” of course!

Longman suggested that the government in effect say to the private sector: “If you expect to get paid by Medicare or Medicaid, you’ll have to join the VistA Health system.  This requires installing VistA software and using it to demonstrate that your are meeting certain VA performance standard.”

While Obama Administration did not take that exact approach, it didgo the top down route.  In 2009 Congress passed and the President signed the HITECH Act as part of the stimulus program.  It budgeted $30 billion to encourage health care providers to adopt electronic health records (EHRs).  They would continue receiving the money as long as they met the federal government’s standards for “meaningful use.”  The results have been predictable.

According to a Government Accountability Office report, while take up of EHRs among hospitals and physicians increased from 2011 to 2012, there was a high drop-out rate from 2011:

The reason, as John Graham explained, is that in 2011, most providers were only in Stage 1 of meaniful use. Stage 2 and Stage 3 were going to be much harder to meet, and providers that couldn’t meet them simply dropped out.

By 2014, “only four hospitals and 50 physicians have achieved the federal government’s goals for ‘meaningful use’” for EHRs.

One side effect appeared to be the EHRs were increasing costs.  Physicians using EHRs were more likely to order more diagnostic tests.

Thousands of different hospitals and millions of physicians and nurses are going to have different needs and preferences when it comes to using EHRs.  One set of standards imposed by Washington is going to hamstring the ability of hospitals and medical personnel to find the EHR system that works best for them.  They end up trying to meet standards imposed from above instead of engaging in a trial and error process to determine which system best meets their and their patients needs.

Those concepts are clearly lost on intellectuals like Longman, who believe in centralized solutions even when evidence to the contrary is in one’s own book.