ConservativeBlog.org
Posted at 15:41h in Blog, Health by David Hogberg

With apologies to Mark Twain, there are lies, there are damned lies, and then there are ObamaCare statistics. Case in point is a column written by Vicki Simons touting the supposed positive effects of ObamaCare:

The positive results of ACA:

— 20 million more American have access to health care than before ACA was passed.

— 8 million people have signed up for health coverage through the state and federal marketplaces; 32,000 in New Mexico.

Not a single one of those is accurate.

1. The statement that “20 million more American have access to health care than before ACA was passed” is easily the most misleading.  It’s intent is to leave the impression that ObamaCare has reduced the uninsured by 20 million.  It came from this study by the increasingly disingenuous Commonwealth Fund.  Here is how they came up with 20 million: 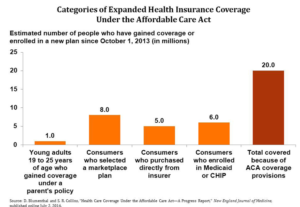 2. Regarding the claim that 8 million people have signed up for coverage on the exchanges, as Reason’s Peter Suderman pointed out the other day, “That statistic, however, leaves out an important detail: how many of those 8 million have actually enrolled.”  That number will decline as insurers drop people who have not paid their premiums.  That could be as high as 15 percent, which means enrollment would be about 6.8 million.  Nor does it include people who will leave the exchange for Medicaid or for employer-based insurance.  The U.C. Berkeley Center for Labor Research and Education estimated that by the end of the year about 42 percent of enrollees in the California exchange will leave for just those reasons.  Presumably, that will happen in other states as well.

3. As for 4.8 million now have Medicaid coverage, Sean Trende exposed the problem with Medicaid numbers back in January.  At the time, he examined November enrollment numbers and wrote, “of the November enrollees, 55 percent are in states where the Obamacare expansion of coverage didn’t occur and the ACA is therefore very unlikely to be directly responsible for their coverage. If we look at the October numbers, a little less than half (49.82 percent) were in states that didn’t expand coverage. Therefore, in total, of the 3.9 million individuals newly covered by Medicaid in October or November, only about 1.9 million are from states that expanded Medicaid.”

Nor do such numbers distinguish between people who are signed up for Medicaid because of the expansion—that is, they would not have previously qualified for Medicaid because their income was too high—and those who have signed up and would have been eligible even without the expansion.  One can argue that the former are covered because of ObamaCare, but not the latter.  But the latter are undoubtedly included in Ms. Simons numbers, thereby rendering them bogus.

4. I examined the claim 3 million young people gained coverage under their parent’s plan a while back and found it to be deceptive.  It included not only young people on private insurance but also those on public coverage (such as Medicaid) and hadn’t been updated in over 21 months.  Fixing those problems showed that the number was, at best, 2.2 million.  Furthermore, using different data from the Census Bureau showed that at most 258,000 young people had received coverage via their parents plan.  But Ms. Simons didn’t have to take my word for it. She could have done a bit of Google searching and found that PolitiFact rated the claim as only “half true.”

Back in April, I noted that the “Administration has shown itself to be utterly shameless in hawking bogus statistics.”  Apparently, so are its supporters.