23 Jul 2014 4th Circuit Agrees: No Evidence Of Congressional Intent. But…

The Fourth Circuit Court of Appeals decision in King vs. Burwell in effect agrees with the D.C. Circuit Court about the evidence of Congressional intent regarding whether premium subsidies should be available on federal exchanges (p. 29):

…we cannot discern whether Congress intended one way or another to make the tax credits available on HHS-facilitated Exchanges.

However, the Fourth Circuit upheld the use of subsidies on the federal exchanges by 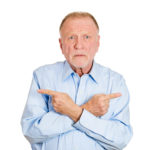 claiming that the InternalRevenue Service had made a decision that was consistent with the broad policy goals of ObamaCare.  Basically, one goal of ObamaCare is expanding insurance coverage, and offering subsidies to people who purchase insurance through federal exchanges is consistent with that goal.  The Circuit Court takes it even further by arguing that because of the features of ObamaCare like community rating and guaranteed issue, insurance would be unaffordable without the subsidies. (No kidding!)

Deferring to a regulatory agency is sometimes known as “Chevron deference” after the case Chevron U.S.A., Inc. v. Natural Resources Defense Council, Inc.  As David Kemp explains it, if “the statute is ambiguous, then the court asks whether the agency’s interpretation of the ambiguous provision is based on a permissible construction of the statute. A permissible construction is one that is not ‘arbitrary, capricious, or manifestly contrary to the statute.’ In other words, it is a very low threshold of deference.”

Yet, courts can’t give deference if the statute is unambiguous.  Section 36B of ObamaCare states that premium subsidies go to people “enrolled in through an Exchange established by the State under 1311 of the Patient Protection and Affordable Care Act.”  That’s not ambiguous.

The Fourth Circuit tries to make it ambiguous by pointing to other parts of the law that suggest premiums would be allowable for on all exchanges.  I’m not convinced by that, but it is likely the argument that the Supreme Court will use if it overturns the D.C. Circuit Courts opinion.

UPDATE:  Also read this great piece by Sean Davis on “drafting error.”  No, sorry, it’s not about football.