29 Jul 2014 Heritage: ObamaCare Increases Private Coverage By Only Half Million

ConservativeBlog.org
Posted at 13:29h in Blog, Health by David Hogberg

A new analysis of health insurance data by the Heritage foundation finds that ObamaCare’s reduction of the uninsured via private insurance was relatively miniscule. Through the first quarter of 2014, only 520,402 people gained coverage via the individual market.

As the chart below shows, the individual insurance market grew by a net 2.2 million, but that was partially offset by a 1.7 million decline in the employer market. 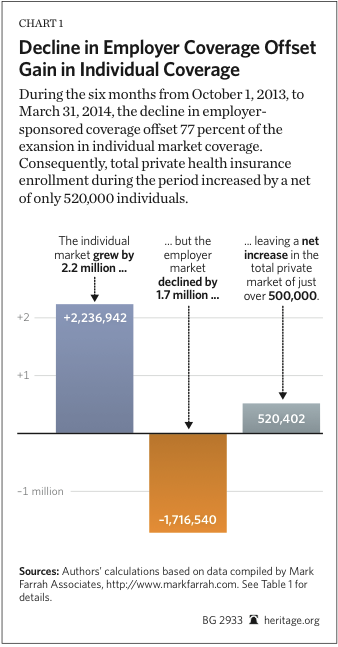 The authors of the report, Ed Haislmaier and Drew Gonshorowski, say “the reduction [in the employer market] can only be explained by employers’ discontinuing coverage for some or all of their workers or, in some cases, individuals losing access to such coverage due to employment changes.” However, the report does not explain why employers are dropping coverage. Certainly, there have been those who have predicted that employers would “dump” employees into exchanges, but the data presented in the report is not definitive on that point.

The authors also write that “it is now clear that at least half of any net increase in total health insurance coverage during the first year of Obamacare will be as a result of its expansion of Medicaid.” Indeed, the study found Medicaid enrollment increased about 4.3 million from September 2013 through March 2014 in the 26 states and Washington, D.C. which expanded their Medicaid programs. In the states that did not expand the programs, Medicaid increased 629,284.

But keep in mind that the expansion states include the first, third and fifth most populated states—California, New York and Illinois—which means it is quite possible that the number of people who signed up for Medicaid in the 26 states and DC and would have qualified without the expansion may be quite higher than 629,284.