Today I have a new National Policy Analysis up entitled “Government Health Care Rewards Failure.”  A version has also been published at Rare.

In it I examine recent events at the ObamaCare exchanges in Maryland and Massachusetts and the waiting list scandal at the Dept. of Veterans Affairs.  The article notes that “[u]nless powerful political interests are harmed by [government] failure, government employees often face no penalties for incompetence or misdeeds. In fact, sometimes incompetence or failure is rewarded.” 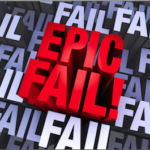 Consider just the case of the Massachusetts exchange.  Known as the Massachusetts Health Connector. It enrolled about 31,700 people by April—only about 13 percent of its 250,000 goal.  Although it was clear to many working at the Connector that they wouldn’t be able to meet the Oct. 1, 2013 launch date, the CEO of the Connector, Jean Yang, failed to inform the Connector’s board of directors about it.

Was Jean Yang fired? Is that a rhetorical question?  Yang still has her job, do the people who work just below her. Apparently, she is so pleased with their performance that she recently gave out raises of $10,000 or more to 11 of the 53 workers at the Connector.

The message she sends is one of “screw up and we’ll give you more money.”  She, of course, defended the action, saying the raises were “needed to retain valued employees and improve performance going forward.” Which leads to the question what kind of value does she put on her employees if the exhange doesn’t work properly?

On a related note, Jillian Kay Melchior at National Review reports on one Jacqueline Middleton who has been indicted by the U.S. Attorney for the Northern District of Ohio for “awarding publicly funded contracts in exchange for kickbacks, home-renovation work, and other pay-offs.”

Middleton was CEO of the non-profit Council of Economic Opportunities of Greater Cleveland (CEOGC) from 1993 until last April.  CEOGC received over $600 million in taxpayer funds from 1999 to 2012 despite numerous news articles exposing her misdeeds.

Melchior ends her article noting that “as Middleton awaits trial, taxpayers would be justified in asking why state and federal officials repeatedly dished out taxpayer money to CEOGC, given the repeated and disturbing reports about misuse of funds and other misconduct.”

For starters, most of those employees are civil service, so they can’t be fired for giving out grants.  In fact, they may have faced heat at work had they blow the whistle on Middleton, especially if she was politically connected.

As Melchior’s story suggests, that was probably the case: The late “Ohio representative Stephanie Tubbs Jones — who received $775 in campaign donations from Middleton between 2005 and 2006 — held a press conference in support of Middleton and praised her for ‘do[ing] a commendable job’ and offering ‘dedicated service.’”

The could easily have have been a warning shot across the bow—do anything to stop Middleton and the cry of “racism” will go up (Middleton is black.)  The last thing government officials want is the NAACP, Jesse Jackson, Al Sharpton and others who profit from race hustling to show up at their doors for a protest (just ask officials in Ferguson, Missouri about that.)  In short, federal officials did nothing because politically powerful groups could have caused them no end of headaches.