ConservativeBlog.org
Posted at 12:42h in Blog, Health by David Hogberg

The Federal Reserve Bank of Philadelphia just released its Business Outlook Survey for August.  Here’s a table that appears on page 2: 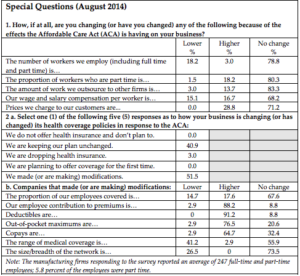 First the good news (yes, there is some).  Only three percent of employers are dropping coverage because of ObamaCare.  That’s three percent too many, of course, but not nearly as bad as many of us had worried it might be.  Of course, this is year one—it could get worse as time goes on.  Let’s hope it doesn’t.

Also, the effect that it is having on wages and compensation appears to be a wash (15.1 percent lower vs. 16.7 percent higher), while the number of employers who have increased the number of employees receiving insurance (17.6 percent) is slightly higher than those who have reduced that number (14.7 percent). 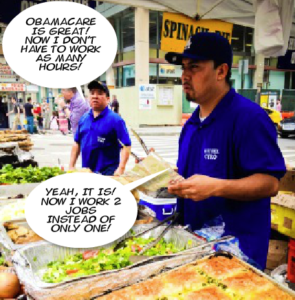 On modifications to employee health plans, the disparities aren’t wide.  They are chasms.  The worst is the deductible category where 91.2 percent of employers are requiring a higher deductible in response to ObamaCare versus 0 percent that are lowering it. The differences aren’t much better for out-of-pocket maximums, copays, range of medical coverage and the size of the network—with all going in the wrong direction thanks to ObamaCare.

And the problems aren’t limited to jobs and health coverage. Nearly 29 percent of employers will be increasing their prices in response to the health care law.  Zero percent will be lowering them.  So not only does everyone get to pay for this as employees and taxpayers, we also get it as consuers too. Who said that ObamaCare wouldn’t require shared sacrifice?

So, if you force employers to provide health insurance to full-time workers, they hire less of them and hire more part-time workers.  And, if you mandate that their plans must cover various benefits, employers find other ways to keep costs down such as increasing cost-sharing and reducing provider networks.

UPDATE: More on this issue from National Center for Policy Analysis and the Wall Street Journal.