13 Sep 2014 Thank you, Oklahoma Daily, for Sowing Discord and Inaccuracy

ConservativeBlog.org
Posted at 04:52h in Articles, Blog by Amy Ridenour 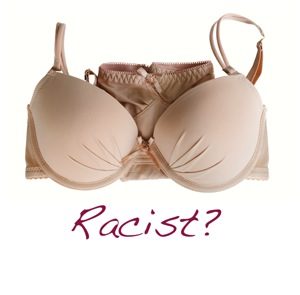 How much whining should the world have to put up with?

This article, by the editorial board of the Oklahoma Daily, complains that calling a bra’s color “nude” is “racist.”

Please, people. In other countries, children are being buried alive by Islamist radicals, starved to death by North Korean’s evil dictatorship, dying of curable diseases because of ignorance and superstition, married off in childhood to ancient putrid lechers — we all know I could go on and on.

If this rises to the level of a problem in your life, get on your knees and thank God for your good fortune.

Furthermore, Oklahoma Daily: Lazy reporting is inexcusable. As a commentator to your own article had to point out for you, “nude” bras are called “nude” because they can’t be seen through light-colored shirts. This is true regardless of the skin tone of the woman.

As the commentator said:

As someone who used to work in a high end lingerie store, let me explain to you the point of a nude bra. It’s really quite simple and has absolutely nothing to do with skin color. A nude bra is made in a light beige color because it’s the only color that won’t show through a lightly colored shirt. A white bra, for example, will show through a white shirt, so of course a dark colored bra would show through a white shirt. I sold nude bras to women of every skin color, because they understand the purpose of owning one. A nude bra is simply about making sure a woman’s outfit is what’s on display, rather than her undergarments.

The example of “racism” was ridiculous even if it had been true, and it wasn’t even true.

Another banner day for the nation’s media, sowing discord and inaccuracy and making the world a worse place than it found it.