19 Sep 2014 How Many Are Still Enrolled In The ObamaCare Exchanges? People Who Care About The Truth Would Like To Know

ConservativeBlog.org
Posted at 04:07h in Blog, Health by David Hogberg

Here is one of my not-so-good predictions:

[Various] factors will cause the eight million figure [of enrollees in the ObamaCare exchanges] to be revised downward as the year goes on.

Each time that happens in the coming months, the media will hark back to the President’s victory dance.  For a public that doesn’t much trust Obama on health care, each revision will likely erode that trust a little further.  They will also provide his political opponents with more opportunities to claim Obamacare isn’t working as well as the President claimed.

Unfortunately, I didn’t count on the Obama Administration stopping the enrollment reports once the open enrollment period was over.  And I don’t really have any excuse since I had previously noticed how fast-and-loose the Administration had played with the data.  It makes perfect sense, though, since it allows ObamaCare supporters and other assorted nitwits to continue using the 8 million enrolled as a talking point through November:

But yesterday we learned from the Administration that enrollment is down to 7.3 million. According to The Hill, the 7.3 million enrollees “reflect those who had paid their premiums through Aug. 15.”

But is it really 7.3 million?  The first reason to be skeptical is the folks in the Administration have always used a slippery definition of enrollee.  During the open enrollment period, they defined enrollee as someone who had signed up for a health insurance plan, while insurance companies didn’t count someone as an enrollee until the first premium had been paid.  The Administration’s definition, of course, let it inflate the numbers.

So what definition are they using this time?  Since enrollees aren’t dropped until they have failed to pay their premiums for three consecutive months, does paid through Aug. 15 really mean that it also includes people who last paid on June 15?  Who knows? 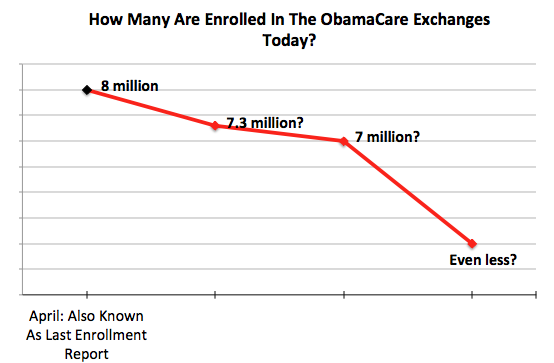 Another reason to be skeptical:  In August, Jed Graham of Investor’s Business Daily reported that Aetna, the “nation’s third-largest health insurer[,] had 720,000 people sign up for exchange coverage as of May 20, a spokesman confirmed to IBD. At the end of June, it had fewer than 600,000 paying customers.”

So, of the 700,000 who have dropped out of the exchanges, 120,000 of them—17 percent—are accounted for by one company?  That dog won’t hunt.  Either the Administration is playing with the numbers or Graham got it wrong.  Since I worked with Graham at IBD for over four years and will gladly vouch for his integrity and competence, my money is on the Administration.

Finally, the drop of 700,000 does not yet include the 115,000 exchange “enrollees” who have not yet confirmed their immigration status nor the 360,000 who have received subsidies but have not confirmed their income. This is not a criticism of the Administration since these people still have until the end of this month to get the requisite information to the government.  We don’t yet know how many of those people will end up losing or dropping coverage.

But we can guess as to when the Administration will tell how much those factors impacted enrollment.  If the number is in the 50,000 range, they will release it in mid-October.  If it is 250,000 or more, the best bet is after the November election.