ConservativeBlog.org
Posted at 16:48h in Blog, Health by David Hogberg

Accountable Care Organizations (ACOs) are supposed to be one of the great innovations in ObamaCare that will save money for Medicare and improve quality for beneficiaries.  There are two ACO programs under Medicare, the Pioneer Program and the Medicare Shared Savings Program (MSSP).  Under these programs, ACOs that generate enough savings for Medicare also get to share in some of the savings.  Thus far, 360 medical organizations have signed up to be ACOs covering about 5.6 million beneficiaries.

Last week the Department of Health and Human Services released the results for 23 Pioneer ACOs and 220 MMSP ACOs, and despite the triumphant tone of the press release, the results are underwhelming.  These ACOs “generated over $372 million in total program savings,” according to the release.  That seems like a lot of money, but it’s a pittance when compared to Medicare’s total $492 billion budget in 2013.  $372 million is about .08 percent of that. 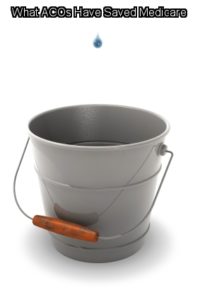 Then there is the question of whether future ACOs would save at the same rate of the current ACOs.  It’s possible that the organizations that entered the program early did so because they figured they had the right patient mix needed to generate savings.  If that’s the case, then ACOs that join later might not generate much savings.

Regardless, it’s unlikely that one percent in savings is going to make much of a dent in Medicare’s $37.4 trillion unfunded liability.

*Here is how I determined that there are 4.1 million beneficiaries in the 23 Pioneer and 220 MSSP ACOs (actually, HHS determined it for me—thanks for the help.)  Anyway, there are 5.6 million total beneficiaries in ACOs.  To get the total number of enrollees in Pioneer ACOs, subtract the total number of enrollees in ACOs, 5.6 million, from the number in the MSSP ACOs, 4.9 million, which equals 700,000.