ConservativeBlog.org
Posted at 16:43h in Blog, Health by David Hogberg

1. Did ObamaCare Increase The Number of Uninsured?

The American Enterprise Institute’s Joe Antos has a great piece on both the recent health insurance surveys from the Center for Disease Control (CDC) and the Census Bureau.  According to Antos the CDC survey “received a great deal of attention [and] said there were 3.8 million fewer uninsured. The other, which was hardly noticed, found that there were 1.3 million more uninsured.”  So why, possibly, did the number of uninsured rise?  The most likely explanation is that of the 4 to 6 million people who lost their insurance last year, about 1 million of those have not bought new insurance. More on this in a later post.

As for the lack of media coverage of the Census Bureau survey, I’m at a loss to explain it. No, really.

2. Visual Aid.  Phil Kerpen put this image together comparing the 2013 Census Bureau Survey with the one for the first quarter of 2014: 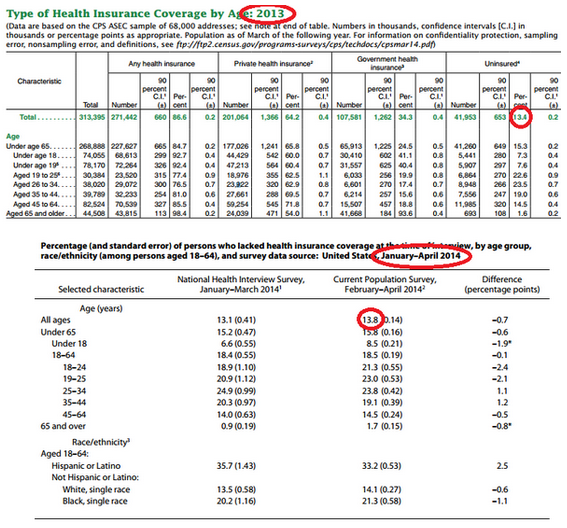 3. Another Reason ObamaCare Is Cancelling Your Plan.  If you don’t understand the concept of “actuarial value,” you should because it can result in the cancellation of your health insurance.  Thankfully, there is this video from the Mercatus Center that explains it all in layman terms:

4. A Rant, But A Pretty Good One.  Bruno Korschek goes through the ObamaCare insured vs. uninsured numbers and then gives an update on some of things that have gone wrong with ObamaCare recently.  If you have some time, give it a look.

5. Something Non-Health Care:  Catfish Crony Capitalism.  The FDA already regulates Catfish, but buried in the 2008 farm bill was a new regulatory program to be carried out by the USDA.  As the Daily Signal reports:

The program actually is a protectionist scheme for domestic catfish farmers. Foreign exporters won’t be able to sell their catfish that Americans already consume until the USDA works with other countries to establish an equivalent regulatory system. This could take several years, assuming other countries even decide to move forward with such a system.