ConservativeBlog.org
Posted at 15:23h in Articles, Blog by David Hogberg

By now, you’ve no doubt seen this photo: 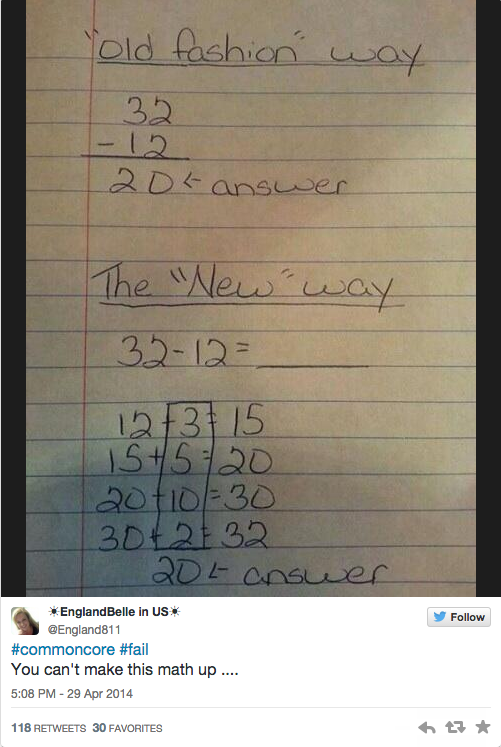 Common Core, it seems, takes the simple way of doing math and makes it convoluted.

Well, Hemant Mehta, who was a math teacher for seven years, argues that too many people aren’t taking the time to learn what Common Core is about.  In fact, he claims, the bottom part of that photo makes sense while the top part does not.

He doesn’t exactly inspire confidence when he “admits” that the bottom part is “totally confusing” and “ridiculous.”  But let’s parse his main argument:

The top is how most of us learned subtraction. I’m sure your teachers taught you what was going on mathematically, but do you really remember what they said? Probably not. For us, it’s just an algorithm. You can do it without thinking. You hope there’s no “borrowing” of numbers involved, but if you had to do it by hand, you could probably pull it off.

The problem with that method is that if I ask students to explain why it works, they’d have a really hard time explaining it to me. They might be able to do the computation, but they don’t get the math behind it. For some people, that’s fine. For math teachers, that’s a problem because it means a lot of students won’t be able to grasp other math concepts in the future because they never really developed “number sense.”

First off, no, I don’t remember what my teachers said (who does?)  Why is that even important?  It’s not. What matters is that they taught you math and you know how to use it.

Second, why is it important to know why it works as opposed to using it properly?  It doesn’t seem that crucial either.  When you are balancing your checkbook, which matters more, that you know 100-12=88 or that you know why 100-12=88?  I suspect that it’s more important for most people who use math on a regular basis, such as engineers, computer programmers, accountants, etc., to be able to use the math correctly.  I doubt the “why” of it does much to help them do their jobs properly.

Third, even if the “why it works” is important, how does the bottom part teach that?  You’ll notice in Mehta’s essay there is no explanation of how using the bottom approach enables a student to understand the “why it works” any better than the top part.  It’s also not clear it helps the student develop “number sense” (a term that, you’ll also notice, Mehta never defines).  Perhaps the bottom approach is better for those things, but without actually explaining why, Mehta seems to be saying “trust me on this.”

Perhaps this approach was tested rigorously before being applied on a wide scale.  But I’m skeptical.  This wouldn’t be the first time the education establishment adopted a new approach that had little empircal evidence to back it up.  Take a look at the controversy over the Phonics versus Whole Language approach to learning reading. By the early 1990s, Whole Language had largely replaced Phonics as the way of teaching reading. How’d that work out? 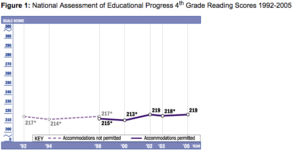