ConservativeBlog.org
Posted at 12:34h in Articles, Blog by David Hogberg

The other evening I got into an twitter debate with twitter user “@albanianhobbit”—a woman who appears to be a teacher in Florida. I’ll have more comments on that next week. For now, I’d like to focus on her final comment in the exchange:

The gist seems to be that while I can disagree with her, “teaching” needs to be left to professionals like her.

My response to that is: NOT A CHANCE!  Parents should be involved the entire way, challenging teachers when they are not preforming and, when feasible, pulling their kids out of schools that fail. (Unfortunately, it’s not always feasible to pull kids out of a failing public school, but it would be under a voucher system.  But that’s another post for another day.)  In short, the ultimate decision about a child’s eduction should reside with the parents, not the teachers. 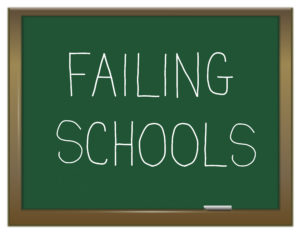 Illustration depicting a green chalk board with a failing schoolsl concept.

Let’s start with the fact that the only reliable way to succeed financially in this nation begins with a good education.  Any student who graduates high school with only sixth grade reading and math levels is probably in for a long climb out of poverty.

Next, if a student receives such a poor education, who pays the cost?  First and foremost will be the student, who at 18 faces a world of limited job opportunities.  Second are the parents of that child who will watch the hopes and dreams they had for their child evaporate.  If they are generous parents (i.e., most parents), they will be assisting their child financially as he struggles to get on his feet despite his lousy education.

What cost will the teachers pay?  They might not receive a bonus, or maybe they’ll move up the pay scale a little slower. They might get transferred to an even worse school.  But they’ll be in almost no danger of losing their jobs.  In short, the price paid by teachers for being wrong pales in comparison to that paid by the child and the parents.

As someone who is a few months away from being a parent myself, I’m going to do my best to reside in an area with good public schools.  But there is no guarantee, and if my child isn’t getting a good education, I won’t hesitate to pay for tutors to help him get ahead.  If push comes to shove, my wife and I have decided we will either home school or find a way to pay for private school.  And I’ll get to do all of that while I’m paying property taxes to support the public schools.  Ultimately, my wife and I will be paying the cost if the public school fails my child.

The thinking represented by the tweet above seems to be that decisions should be made by those with “expertise.”  Yet expertise is no substitute for having the proper incentives to get the decision right.  And no one has a greater incentive than those who pay the cost for being wrong.

That’s a pretty good description of how decisions have been made in public school systems over the last few decades.  It’s also a good explanation of why so many public schools continue to produce dismal results.