ConservativeBlog.org
Posted at 13:27h in Blog, Health by David Hogberg

The best way to determine the priorities of any government agency is to look at how its budget is spent. Unfortunately, a detailed budget from the Centers for Disease Control isn’t available, so we must use other methods to determine the CDC’s priorities.

Examining an agency’s press releases is another good method.  Press releases represent the face that those who run an agency want to put forward to the public, so if an agency puts out more press releases on, say, smoking rather than Ebola, it’s a pretty good bet that the folks who run the agency put more importance on tobacco-related illnesses.

So, my industrious research associate and I examined the CDC press releases from July 2009—shortly after current CDC director Dr. Thomas Frieden took over—up to the end of July of this year when CDC first started paying attention to the current Ebola outbreak.

During that time, CDC issued 104 press releases on diseases that most people probably think the CDC should monitor, for instance communicable diseases like HIV and tuberculosis, and those passed on by insects like the Heartland Virus.  However, only one of those press releases dealt in any way with Ebola.

Here, then, are other types of “diseases” that received more press releases than Ebola: 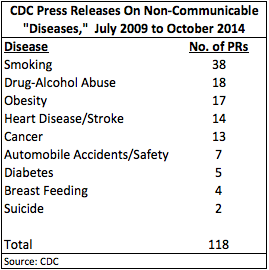 The first thing to notice about the table is that some of these aren’t even “diseases,” e.g., automobile accidents, smoking and breast feeding.  Others such as cancer and diabetes certainly qualify as a disease, but by and large, they are non-communicable, so it’s questionable whether the CDC should be tracking them.

The table above suggests that under Frieden political crusades have become more important to the CDC.  Campaigns against smoking and obesity, or promoting breast feeding, no doubt please various parts of the political left.  By contrast, the CDC wouldn’t get as much political mileage from talking about all the things it’s doing to prevent an Ebola outbreak.

If the CDC’s press releases are any indication, politics has been a big priority for Frieden.  It appears CDC resources have been used for those purposes instead of protecting Americans against one of the deadliest viruses known to man.

1. Press releases on cervical cancer were excluded from the above table since it can be spread by a virus.

2. There were other such non-diseases that received one press release including climate change, medical bills, sexual violence and gay and lesbian health.