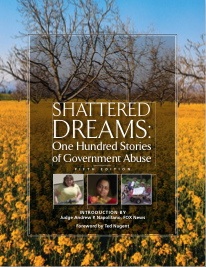 I wrote in July that the huge public employee labor union AFSCME decided to stop working with the United Negro College Fund because the UNCF accepted a $25 million contribution from Koch Industries and the Charles Koch Foundation to fund college scholarships for black students.

AFSCME, the American Federation of State, County and Municipal Employees, thought the black students should do without the scholarship money because… well, that was unclear. AFSCME hates — and I do mean hates — limited government advocates because smaller government means fewer government employees, which means more dollars for taxpayers and less for AFSCME.

That said, giving scholarships to black students doesn’t make the government smaller, so why should AFSCME mind?

In that spirit, I wonder what AFSCME thinks of the just-announced Koch donation to the National Association of Criminal Defense Lawyers. The grant, according to Carl Hulse in the New York Times, will help finance “a program to provide scholarships and training for public defenders. The grant will also pay for a review of indigent defense programs to see what works in providing legal representation to those who can’t afford it.”

AFSCME seems to be keeping its mouth shut about this grant, but I looked in vain for any sort of praise from the left or from liberal bloggers, though there was praise from numerous quarters on the right.

I can only assume the left doesn’t care about poor people who need lawyers, which doesn’t surprise me a bit.

For my part, I hope some of the grant is used to help defense lawyers fight civil asset forfeiture, as I assume it will, directly or indirectly. Civil asset forfeiture allows government to take the property of innocent people because someone else used it in a crime. This abusive process should not exist, yet few of our lawmakers (on the state or federal level) are working to stop it because government likes our money and our stuff, and not enough of us have kicked up a fuss.

I suspect most of us think the victims of these laws will always be someone else, but those sorts of assumptions are only true until they aren’t.

The National Center for Public Policy Research has written several books shining a spotlight on a host of corrupt and dangerous government practices, and a slew of preposterous, ineffective, and costly regulations. A consistent theme in the books (see the chapters on police power and civil asset forfeiture) are stories of ordinary, honest people victimized by civil asset forfeiture. Several of the books are available free, in PDF form. If you aren’t already aware of the gross behavior of our “public servants” in this arena, I invite you to download free copies. If you agree with me that civil asset forfeiture must be stopped, consider sharing a copy or two of these free books with friends.