ConservativeBlog.org
Posted at 12:57h in Articles, Blog by The National Center

Last week, I wrote about the National Popular Vote (NPV) compact that seeks to reform the Presidential election by severely retrenching the current Electoral College system.  The NPV scheme would operate through an interstate compact among the 11 or 12 states needed to reach the 270+ electoral votes needed to win out of 538 total. The NPV would amass the electoral votes from the compacting states in one heap, and grant them to the candidate with the majority (or plurality) of votes in the aggregate popular vote of the whole country.

A legal memorandum written for the Heritage Foundation by their senior legal fellow Hans von Spakovsky lays out five reasons why the NPV is bad public policy.  Let’s look at the first two today.

1. The national popular vote would lead to decreased presidential legitimacy. Candidates would campaign in at most twenty to thirty large population centers with large media markets, e.g., New York City, Los Angeles, Chicago, Houston, Philadelphia, Phoenix, and so on.  Small and medium sized states that lack large cities would have no say in the election of the executive branch.  Under the current system, it is true that the candidates spend the majority of their time on the stump in seven to ten swing states.  But, the swing states in question vary from election to election, and the winner-take-all system imposes discipline and moderation in the candidates. In order to secure 270 electoral votes, the candidates need to be competitive in the bulk of the 50 separate state elections, and therefore must put together a platform that appeals to a wide swath of the electorate—conservative, moderate, and liberal—in all regions of the country.

2.  Proponents of the NPV claim that the Electoral College shortchanges the smaller states because the bulk of the electoral votes are allocated to a dozen or so large and medium states.  But the math behind the NPV’s claim to increase the influence of smaller states does not add up.

In 2008, John Samples, director of the Center for Representative Government at the Cato Institute, conducted a study that compared the influence of states in a national popular vote to their influence in the Electoral College. To make an apples-to-apples comparison, Samples first calculated the influence each state would have in a national popular vote like the NPV scheme by computing the ratio of each state’s eligible voters divided by the total number of eligible voters in the US based on 2000 Census data.  Samples then calculated the influence of each state in the Electoral College by computing the ratio of each state’s electoral votes divided by the total 538 electoral votes.  By subtracting the second ratio from the first, Samples arrived at the percentage gain or loss of influence in each state. 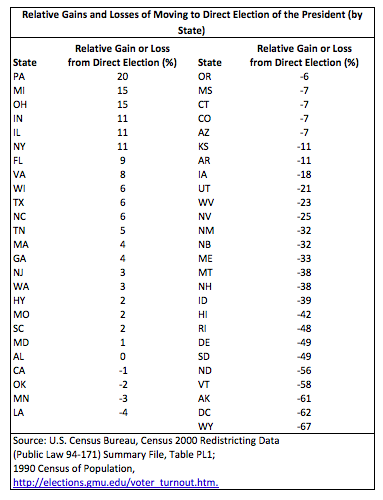 Tomorrow, we will look at three reasons the NPV compact is fundamentally flawed in regard to electoral legitimacy and voter fraud.