ConservativeBlog.org
Posted at 23:20h in Articles, Blog by Amy Ridenour 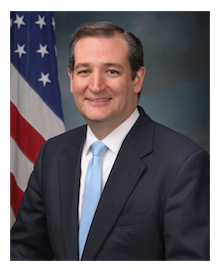 Senator Ted Cruz (R-TX) is continuing his fight to limit government interference into (and taxation of) the Internet, today releasing a compilation of comments he has received since his Washington Post op-ed and short video were released last week (you can watch the video here).

Here’s a few of many (emphases were added by me):

“Sen. Ted Cruz got it right last week when he tweeted that Title II would be ObamaCare for the Internet.”

“Private Internet providers already compete with each other to provide broadband access to millions of Americans, and limiting their ability to sell their products how they see fit will stifle innovation and competition, not encourage it. Sen. Cruz is right that imposing new government controls on the Internet will lead to fewer choices, fewer opportunities, and higher prices.”

“The greatest threat to the Internet is the slow encroachment of government power. Public utility regulations lead to monopolies and slower service. Imposing Title II on the Internet would open a Pandora’s box of larger broader government control worldwide. Senator Cruz’s position was the bipartisan consensus in the 90’s: Title II is unwise and unnecessary. Congress, not the FCC, should decide how to address hypothetical concerns about free speech and anticompetitive conduct — while maintaining the regulatory light-touch that began under President Clinton and continued under Republicans. That ‘Hands off the Net’ approach has driven over $1.3 trillion in private broadband investment and allowed the Internet to flourish.”

“Senator Cruz has been a vocal opponent of the Marketplace Fairness Act, which passed the U.S. Senate in May of 2013. The legislation, if passed, would create a dizzying maze of new sales tax mandates for hundreds of thousands of tech-enabled small businesses across the country. In addition, it would give unprecedented authority to state tax enforcement agents and allow them to cross borders and enforce their laws on businesses located in other states. Senate Majority Leader Harry Reid (D-NV) has announced his intention to try and move the Marketplace Fairness Act in the final weeks of Congress. However, Senator Cruz, along with a number of his colleagues in the House and Senate, have expressed their concern and opposition.”

“Senator Cruz is right on target in warning that the Internet regulations President Obama seeks would destroy innovation and harm consumers. The FCC should officially foreclose the draconian option of reclassifying the Internet under Depression-era monopoly telephone rules by closing the Title II docket once and for all. Senator Cruz recognizes the dangers of turning back the clock on Internet freedom; it’s time for the Administration to do the same.”

“The Internet we’ve all grown to rely on, and it has been especially helpful to working moms like me, has come about in the absence of excessive government regulation. Sen. Cruz is right to be wary of the Internet power grab the White House has proposed, especially in the wake of the IRS and NSA scandals.”

There are more comments here. Don’t take our free Internet for granted. Share this, Facebook it, Tweet it or just tell your Senators what you think before the Internet as we know it today is gone.