ConservativeBlog.org
Posted at 09:36h in Articles, Blog by David Hogberg

FrontPage Magazine has published part 1 of my three-part interview with economist Thomas Sowell, who has just released the 5th edition of his best-selling book Basic Economics. The interview covers not only his new book, but also civil rights, race hustlers and immigration.  Here is a snippet:

David Hogberg: What do you think motivates Al Sharpton and Bill de Blasio to involve themselves in these incidents? Is it in any way really a concern for civil rights? 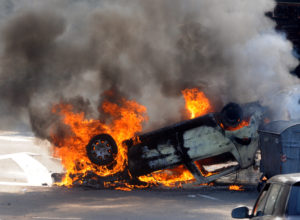 Thomas Sowell:  Not in the slightest. It is obvious that for de Blasio it suits his political interests and for Sharpton it suits his power and income interests.  De Blasio hopes to use this to turn out the minority vote next time around.  As for Sharpton, well, he owes, I think it is literally, millions of dollars in back taxes. I have never owed millions of dollars in back taxes. Alas, I never had any reason to be owing millions of dollars.  So, really, a man of fairly modest accomplishments is living very high on the hog, on the strength of his ability to exploit the guilt of white people and the gullibility of such blacks as he can get to follow him.