ConservativeBlog.org
Posted at 09:25h in Blog, Health by David Hogberg

During last night’s State of the Union speech, President Obama made one grandiose claim regarding ObamaCare: “And in the past year alone, about ten million uninsured Americans finally gained the security of health coverage.”

The claim is based on an article in the New England Journal of Medicine that uses data from the Gallup-Healthways survey.  But digging into the survey data shows that ObamaCare has actually succeeded at making Americans more dependent on government: 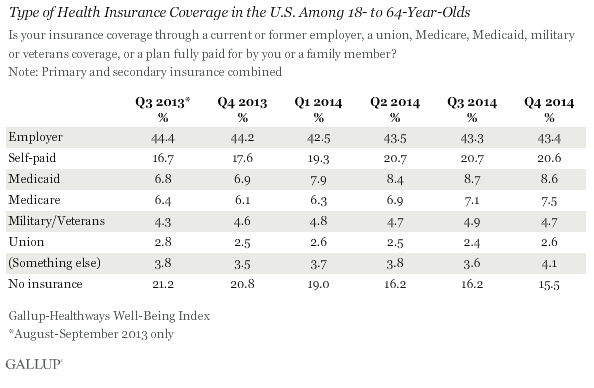 If you do the math, you’ll notice that the number of people who are on Medicaid has increased by over 29 percent since Q3 2013. No doubt this is due in large part to the ObamaCare Medicaid expansion.  Then there are the “self-paid” insured who have increased 23 percent.  But as John Graham notes, “‘Self-paid’ is actually a misnomer, because most of these people are in Obamacare health-insurance exchanges, where almost all of them receive subsidies.”

Then there is Medicare enrollment—which has increased about 17 percent.  That’s not the fault of ObamaCare. This increase is probably due to the big uptick in people who have joined Social Security Disability Insurance (SSDI) since 2009.  SSDI recipients are usually eligible for Medicare after a two-year wait period.  Of course, they wouldn’t be going on SSDI if the economy had recovered quickly after 2009.  We can thank the Obama Administration’s economic policy for the fact that it didn’t.

So, when Obama says that 10.3 million Americans have gained health coverage, what he means is that about 10.3 million have become more dependent on government.