ConservativeBlog.org
Posted at 23:40h in Blog, Health by David Hogberg

Last Tuesday, when asked about his expansion of Medicaid, Kasich replied, “Now, if you ever read Matthew 25, I think, ‘I wanna feed the hungry and clothe the naked,’ and I have to tell you — I read a horrible story in The Wall Street Journal on the weekend about people, one man in particular freezing to death over in Montana.  And they’ve turned down about half a billion dollars of help, I’m told. That disturbs me.”

In June, Kasich upped the ante by telling a state legislator, “Now, when you die and get to the, get to the, uh, to the meeting with St. Peter, he’s probably not gonna ask you much about what you did about keeping government small, but he’s going to ask you what you did for the poor. Better have a good answer.”

King Solomon, in all of his wisdom, could not have been more eloque 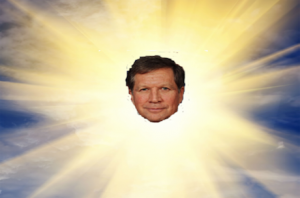 It turns out that expanding Medicaid, even via executive fiat, is indeed an act of Christian charity.  Shortly after the Ohio expansion, the cloudy skies above Kasich opened up, and a voice from heaven proclaimed, “This is my beloved Governor, with whom I am well pleased. ”

For those of you unfamiliar with the segment of Matthew 25 that Kasich alluded to, it reads:

Of course, some aspects of Medicaid are un-Godly.  For example, among all physicians, nearly one-third are no longer seeing new Medicaid patients and that number may well be over 45 percent for some specialists.  The most likely reason is that Medicaid’s reimbursement rates are among the lowest of all health care plans.

Nor is Medicaid particularly efficient.  The U.S. spends over $415 billion on Medicaid, and, according to the Oregon health experiment, Medicaid has no noticeable impact on patient health.  Other research suggests that children at hospitals that are more reliant on Medicaid funding have more adverse events.  Similarly, patients with Medicaid are more likely to be be diagnosed with late-stage cancer than patients with private insurance who are more likely to receive diagnoses at earlier stages.

However, only the uncharitable would say that we shouldn’t expand Medicaid.  As Kasich is showing us, it is the duty of all good Christians everywhere to repair it. That means supporting more Medicaid funding.

Finally, what about the man who froze to death in Montana?  In January 2007, 48-year-old Bryan Dennis was found dead of hypothermia in a truck at a U-Haul store in Bozeman.  He was unemployed at the time and had been staying in motels.  He’d told a friend he was going to sleep in U-Haul trucks.

But those are the concerns of the heartless.  As Governor Kasich has reminded us, using government to force people to help the poor is the same as Christian charity.  After all, when you meet St. Peter at the Pearly Gates, one of the questions you will have to answer is, “Did you support a generous Federal Matching Percentage?”