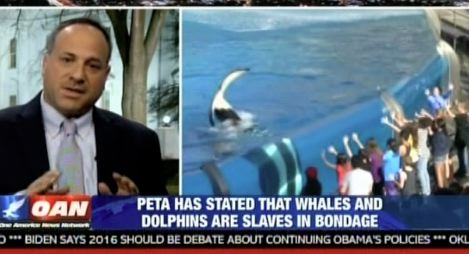 There’s been legislation introduced in Washington state that would make it a crime to have a dolphin or a whale “for performance or entertainment purposes” and breeding.  Doing so could land the offender in jail for six months and liable for a $100,000 fine, although it’s clear the true intent of the law is to demonize animal entertainment and educational venues such as SeaWorld.

A hearing on the bill was held earlier this month in Olympia.

Jeff Stier, the director of the National Center’s Risk Analysis Division, noted this bill under consideration in the Evergreen State is but one small aspect of a larger, national assault by radical environmentalists to destroy mankind’s stewardship of and interaction with the animal kingdom in particular and all of nature in general.

On the 2/12/15 edition of “The Rick Amato Show” on the One America News Network, Jeff said, “this isn’t about SeaWorld or the orcas.  This is about the radical environmental view that we humans should not own animals for entertainment or other uses — they should be out in nature being happy.”

Succinctly describing the motivation of these extremists, Jeff pointed out:

[T]he radical animal activists don’t want humans to be in charge of nature.

Explaining the animal rights agenda in more detail, and the role that this individual piece of legslation plays in fulfilling that agenda, Jeff said:

Right now, the legislation in Washington state is limited.  What’s under consideration is limited to dolphins [and] whales/orcas.  But that’s not where the agenda is limited to.  This is a first step.

But these radical environmental groups, whether it’s PETA or the Humane Society, are on record on their view on this: they don’t want animals in capitivty.  First, it’s the whales.  Next it’s the zoo.  And, soon, it’s Fido…

[T]hey’ll start with something relatively small.  There are no aquariums or SeaWorlds in Washington state, so they can say, “Oh, this won’t really impact business in Washington State.”

What they want to do is get a foothold, and then start advancing it from there.  There’s no question about it — the agenda of these groups is a radical one.

Amato noted that “it’s an important story from that standpoint” in that these activists are establishing a precedent to go after bigger targets elsewhere at a later date.  He told Jeff, “I really appreciate the way you broke it down.”

Noting this oft-used strategy of the left, Amato added: “You have this radical agenda, and you chip away.  You chip away until you can have a greater impact.”