ConservativeBlog.org
Posted at 01:43h in Blog, Health by David Hogberg

The above is the title of a piece by David Catron at the American Spectator.  The “Wayback Clause” in ObamaCare is responsible for the law’s ability to impact phenomena prior to the law going into effect.  Catron noted that “most celebrated effect of this amazing provision is its retroactive reduction of medical inflation during the years preceding the law’s implementation.”

That includes, apparently, the recent slow rate of Medicare growth too.  Last week the, the Ministry of Truth Department of  Health and Human Services (HHS) released a document entitled “Medicare Spending Growth Since 2009.”  Here’s Table 1 from the document:

“What policies have contributed to the Medicare spending growth slowdown?” HHS asks.  Here’s one: 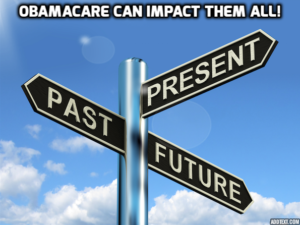 The document doesn’t make clear which benchmarks are being referred to.  Perhaps it means the provision limiting MA plans to spending “no more than 15 % of their Medicare payment on administrative costs, insurance company profits and non-healthcare related items.”  That, however, is much like the MA Quality Improvment Plan in that neither began until 2014. And that’s what’s so remarkable about the ObamaCare’s Wayback Clause: Those programs were able to lower growth in Medicare Advantage beginning in 2009.

Here’s another supposed contribution to slow down in Medicare growth according to HHS:

The Medicare program is implementing a wide range of delivery system reforms to improve quality and lower costs such as fostering the growth of Accountable Care Organizations and testing bundled-payment arrangements. Initial results from some models suggest some promising impacts on both costs and quality.

Thus far, the savings achieved thus far by Accountable Care Organizations (ACOs) in Medicare have been miniscule, about $372 million, or .08 percent of Medicare’s budget.  But, more importantly, the first ACO project didn’t begin until 2012.  For a lesser law that would be a problem, but thanks to ObamaCare’s Wayback Clause, ACOs started generating savings back in 2009 if that’s when Obama Administration says that they did.

For another example of ObamaCare’s Wayback Clause in action, read Catron’s article on Jonathan Cohn’s analysis of an Urban Institute report.