ConservativeBlog.org
Posted at 15:04h in Blog, Health by David Hogberg

That title of this blog post, of course, is intended to be sarcasm.  That an expansion of Medicaid would lead to a rise in emergency room (ER) visits is about as unexpected as looking to the east sometime early in the morning and seeing the sun.

ERs have long been the haven of Medicaid patients in large part because its low reimbursement rates make it difficult for such patients to find physicians willing to see them.  Exactly how expanding Medicaid under ObamaCare was supposed to result in anything different was never clear. (Perhaps Governor John Kasich was going to ask God to produce a miracle).

Anyway, a new survey by the American College of Emergency Physicians finds that 75 percent of emergency room physicians have seen an increase in ER visits in the last year: 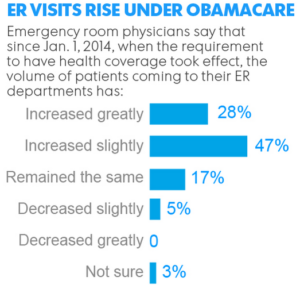 As the Manahattan Institute’s Avik Roy put it in USAToday, “It goes to the false promise of the ACA… [Medicaid recipients are] given a card that says they have health insurance, but they can’t have access to physicians.”

Adding to the false promise is the fact that Medicaid is ineffective an improving the health of recipients, as the Oregon Experiment study found back in 2013.

So, the Medicaid expansion hasn’t resulted in easier access to health care and probably has not led to any improvement in health for recipients.  But, hey, at least some hospitals seems to be making money.

UPDATE:  One commenter on our Facebook page asked how I knew that the increase was largely due to the Medicaid expansion.  Good question.  According to the article, “56% of doctors in the ACEP poll reported increases in Medicaid patients.”