ConservativeBlog.org
Posted at 08:56h in Blog, Health by David Hogberg

More evidence that the ObamaCare exchanges are heading for a death spiral, this time from Montana:

Health insurers selling individual policies on Montana’s Affordable Care Act marketplace say rate increases are likely next year after they suffered losses they attribute in part to initial under­estimates of the costs of the new business.

I’ve tracked down the average requested premium increases for companies on the Montana exchange.  They range from 22.4 percent to 45.1 percent*: 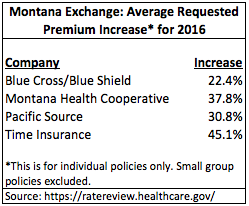 Those are the types of rate hikes that can drive some of the younger and healthier folks to drop their insurance, leaving the insurance pool older and sicker.

Here are some of the losses driving those requested hikes:

PacificSource, which has its headquarters in Springfield, reported a loss of about $17 million last year. It serves about 275,000 customers on commercial insurance, Medicare plans and managed Medicaid plans. 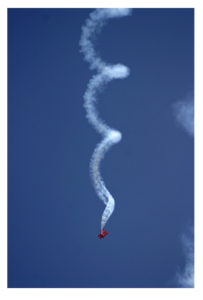 The Montana Health Co-op, a new nonprofit insurer, lost about $4 million last year on $30 million worth of business, said its CEO, Jerry Dworak. The co-op insures about 25,000 people in Montana and another 19,000 in Idaho.

Last week I published a National Policy Analysis, entitled “The ObamaCare Death Spiral Rears Its Head,” looking at big rate increases proposed by insurers on the exchanges of five states: Maryland, Oregon, New Mexico, South Dakota and Tennessee. Montana is the newest addition to the list, and to listen to a VP of PacificSource it won’t be the last:

“What we’re seeing across the country is that nearly all health insurers, large and small, are losing money in the individual marketplace,” said Todd Lovshin, vice president and Montana regional director for PacificSource,which offers policies on Montana’s marketplace.

*This blog post originally stated the highest premium increase was 46.6 percent.  That has been corrected to 45.1 percent.