ConservativeBlog.org
Posted at 05:36h in Blog, Health by David Hogberg

Apparently, the deadline to test the new ICD-10 system with Medicare has just passed.

If you’re wondering what “ICD-10” is, don’t worry …actually you should worry, for reasons I’ll explain in a bit.

Anyway, ICD stands for International Classification of Disease.  It is a system of diagnostic codes that physicians use to let Medicare and every other insurance provider know what the patient is being treated for. Depending on the diagnosis, ICD codes are from three to seven digits in length. So, if a physician sees a new patient and he diagnoses him with anemia, he would use the ICD code 280. If it is a more serious type of anemia, like Plummer-Vision Syndrome, the ICD code used would be 280.8.

If you think dealing with over four times as many codes is going to add considerably to the costs of running a physician’s practice, you’re right.  According to John Grimsley and John S. O’Shea, M.D. of the Heritage Foundation, “the potential cost of productivity loss [could] be anywhere from $8,500 to over $1.6 million per practice per annum…depending on practice size.” Of course—and here is why you should be concerned—the more resources that physicians have to spend dealing with codes mean less resources that will be spent treating patients.

While the cost of complying with ICD-10 will fall on all physicians, it is likely to fall hardest on primary care physicians, a topic I examine in my forthcoming book, Medicare’s Victims: How the U.S. Government’s Largest Health Care Program Harms Patients and Impairs Physicians. (“Squeezing every last bit of book promotion out of this blog, aren’t we?” — the Wife.)

One of the physicians I interview, Dr. Juliette Madrigal-Dersch, explains it this way:

When you are a primary care physician, you are going to see a much wider variety of illnesses. If you are a specialist you are going to see a much more finite number of illnesses, especially if you are, say, an orthopedic surgeon who does primarily knees, probably 90 percent of all your codes are going to be the same five codes. As opposed to primary care, you never know what’s going to walk through the door. You could get something very rare. And now you have to be so specific with the codes. You have to code for “fall from uneven ground,” or “fall from tractor.”
Indeed, the ICD-10 codes have become something of a laughingstock.  If it can be coded, it probably is in ICD-10.  For example, there are codes for a bite from one of these guys: 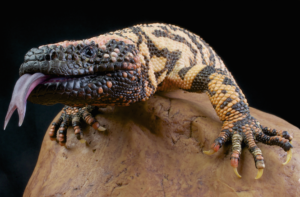 The Gila Monster is found primarily in the Southwest United States and Mexico.  And there must be an epidemic of Gila Monster bites!  How else to explain the fact that there are 13 ICD-10 codes for having this guy clamp down on your hand?  Indeed, it is so serious that physicians may need to practice coding for Gila Monster bites.  One of the codes, T63.111, “should only be used for training or planning purposes.”

Here is a table listing the other 12 codes: 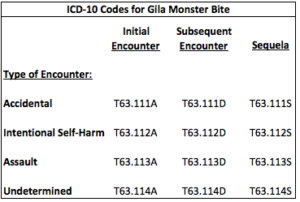 This leads to a number of questions.  First, are there are lot of people who get bit by a Gila Monster more than once?  Second, is it correct in assuming that the “intentional self-harm” codes are there because a lot of people use this type of lizard to attempt suicide?  Finally, how do you assault someone with a Gila Monster?  I don’t know the answers to those questions, but I sure am glad that ICD-10 includes codes for them.

Now, here is the part where you come in.  ICD10Data is a search engine for ICD-10 codes.  I want you to go there, and type in any animal or object (like a lamp post or sink) that you can think of, and see if the ICD-10 has a code for it.  If it does, go back to the Facebook page that led you to this blog post, and in a comment tell me what animal or object you found a code for.

After all, what else are you going to do with your Fourth of July weekend?