ConservativeBlog.org
Posted at 05:03h in Blog, Health by David Hogberg

A quick note:  Tomorrow I’ll be presenting my book, Medicare’s Victims, at the Heritage Foundation at Noon.  Details here.

Today the Washington Examiner has run my article, “Medicare’s midlife crisis: Catastrophic finances pit doctors against patients.”  In it I examine Medicare’s financial difficulties and how that leads to government interfering in the doctor-patient relationship.  Here is a snippet:

When Medicare became law in 1965, the first part of the legislation was titled, “Prohibition Against Any Federal Interference.” It states, “Nothing in this title shall be construed to authorize any Federal office or employee to exercise any supervision or control over the practice of medicine,” a rather explicit promise that Medicare would not interfere with the doctor-patient relationship.

If this was an attempt to assuage the public, it was dishonest. A later section of the law stated that “no payment may be made under part A or part B [of Medicare] for any expenses incurred for items or services … which … are not reasonable and necessary for the diagnosis or treatment of illness or injury or to improve the functioning of a malformed body member.” That put Medicare on a collision course with the doctor-patient relationship. Inevitably some physician would deem a treatment “reasonable and necessary” that Medicare did not. 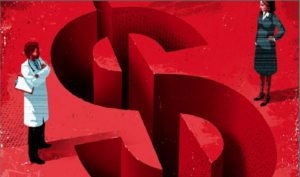 Here is a prediction on Medicare’s future:

This is where a government healthcare program like Medicare inevitably leads. As the program’s costs exceed the means to pay for it, expenses must be reduced. Members of Congress will, of course, reduce Medicare’s costs in ways that cause them the least amount of political trouble.

That means the sickest Medicare patients will suffer the most because they are the most politically powerless. First, relatively few people get seriously ill each year, too few to have much impact on congressional elections. Second, because they are ill, they are in no condition to be organizing, protesting, getting media attention and the other things that can compel Congress to change Medicare policy. Finally, some of them are so ill that they won’t be around much longer to cause Congress any headaches.