ConservativeBlog.org
Posted at 03:40h in Blog, Health by David Hogberg 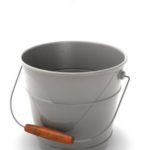 One of the, ahem, “reforms” ObamaCare introduced to Medicare was Accountable Care Organizations (ACOs).  ACOs were supposed to save money for taxpayers and improve the quality of care for Medicare beneficiaries.  (To understand what an ACO is, go here.)

In 2013, ACOs saved Medicare about $492 million.  If that savings was extended to all Medicare beneficiaries (not just those in ACOs), I estimated it would save Medicare about one percent (0.96 percent to be exact).

Early last week the Centers for Medicare & Medicare Services boasted that “Medicare ACOs Provide Improved Care While Slowing Cost Growth in 2014.”  For the Shared Savings ACO program, total “net savings to the Medicare Trust Funds was $465 million.”  For the Pioneer ACO program, it’s not clear how much Medicare saved, although a good guess is about $38 million, since total savings were $120 million and 11 of the Pioneer ACOs qualified for “shared savings payments of $82 million.”  That’s a total savings to taxpayers of $503 million ($485 million + $38 million). 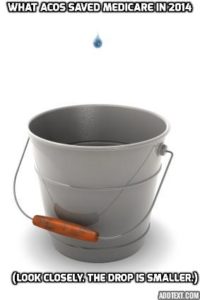 How much savings would that generate if all 54 million Medicare beneficiaries were in ACOs?  There were about 7.8 million people in ACOs in 2014, which means the ACOs saved about $64.64 per beneficiary ($503 million divided by 7.8 million).  Multiply $64.46 by 54 million and you get about $3.5 billion.  That $3.5 billion represents about 0.69 percent in savings of the roughly $505 billion Medicare budget.

In conclusion, and I’m just guessing here, but I don’t think this ACO idea is going to solve Medicare’s $41 trillion unfunded liability problem.