26 Dec 2015 Why is Tim Cook Producing Apple Products in China?

Apple CEO Tim Cook says he is moving Apple production to China not because of low wages, but because China invests more in vocational training than the United States does. Fox Business host Neil Cavuto suspects Cook is not being totally truthful with this statement.

Cavuto interviewed Justin Danhof of the National Center for Public Policy Research’s Free Enterprise Project about this issue, and Justin took it a step further:

“It’s very interesting that when Charlie Rose just pointed out a very simple fact of the modern world economy that most Business 101 students know, that Cook got very defensive on this issue,” Danhof said. “And it speaks to a pattern in the Cook administration… where anytime someone criticizes Apple, they get very defensive… And it was interesting his response was to attack American workers.” 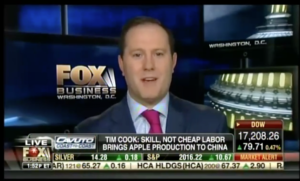 Watch Danhof’s entire 12/21/15 appearance on “Cavuto Coast to Coast” below.