12 Feb 2016 Genital Checks: Not Coming to a Restroom Near You

ConservativeBlog.org
Posted at 11:48h in Articles, Blog by Amy Ridenour 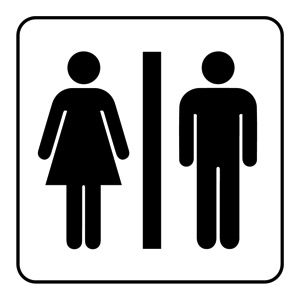 Left-wing websites have in recent weeks been running false stories that Republican legislators in various states are introducing bills to mandate “genital checks” – literally, genital inspections, on the public to make certain their anatomical gender matches the restroom they are entering.

The proposed bills do no such thing. In short, the articles lie.

In Washington State, a proposed bill that keeps the state out of regulating who enters which public restroom — literally the opposite of what the leftists are contending, is being described as a bill that “will force everyone to show their private parts before they can use a restroom.”

“Now these perverts want to sexually abuse little girls in bathrooms, over and over and over,” the same article says.

Another article is headlined, “Republicans demand girls flash their vaginas to get into women’s toilets.”

Another foolish website asks, “who the hell is going to check for genitals outside of all the bathrooms in the state of Washington? Doesn’t that sound a little ridiculous and unreasonable?”

Yes it does. So ridiculous and unreasonable, it is hard not to suspect that most if not all of these websites’ editors know perfectly well they are misleading their readers.

In fact, the proposed law, the current version of which is easily available on the Washington legislature’s website, simply says that businesses or institutions that offer the use of restrooms to the public are allowed to segregate their restrooms by anatomical gender if they want to — but they do not have to. That’s all.

Basically, the state would be staying out of restroom regulation.

This bill protects restroom owners from lawsuits, which in turn is in the public interest, because if business owners start to fear expensive lawsuits because they offer free restroom access to the public, guess what? They’ll stop letting the public use their restrooms in self-defense.

Try to find a public restroom then!

Please note, though, that the proposed legislation does not require restroom owners to have any particular rules. If the restroom owners don’t care if adults with different genitals use the same restroom, Washington State (if it passes this bill) doesn’t care, either.

From a freedom perspective, this bill seems to be as good as it gets. But certain “trans” activists (I very much doubt they speak for all “trans” activists) are angry about this bill because they want the states to require businesses and institutions that offer public restroom access to let any adult in any restroom they wish to enter, and they want to be able to sue any business, charity or institution that doesn’t allow this. So a state law that leaves the rule making in the hands of the restrooms’ owners very much dissatisfies them.

But rather than say so — which, admittedly, won’t get them much public sympathy — they’ve made up the canard that a bill that creates no state requirements on who uses which restroom in fact 1) sets strict requirements, and 2) mandates that an official inspector look at everyone’s genitals before they enter a restroom.

Idiotically, some incredibly gullible people are believing “genital check” claims — even when the websites, in at least a bit of a concession to honesty, print a portion of the legislation that says the opposite.

I’ve mentioned one bill in Washington state, but this lie is being told elsewhere, about other bills. The national leftist web news site Raw Story, for example, ran a story saying a proposed Virginia law would mean “adults would be required to inspect children’s genitals before they use the bathroom.”

Raw Story quoted an “expert” claiming, falsely, “This is what the conservative movement has devolved into: forcing children to allow adults to examine their genitals out of misplaced fear that transgender kids and adults might commit a hypothetical never-before-seen act of violence or sexual aggression…”

I wrote this blog post so anyone who sees one of these silly stories, regardless of the state, can find an article though Google to explain what is going on.

The entire thing is silly, and it is disheartening that activists are willing to so brazenly lie, but I suppose they think they have to to win. They certainly won’t get the public outraged with truthful headlines such as: “Proposed State Law Would Leave Restroom Policies The Way They’ve Been Since Before You Were Born.”