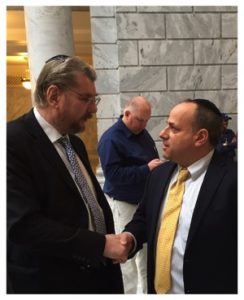 The National Center’s Jeff Stier is in Salt Lake City today, where he and a group of about thirty people politely, and silently, held signs opposing a massive 86.5 percent tax hike on e-cigarettes, the tobacco-free devices that permit people who are addicted to nicotine to get that nicotine “fix” without inhaling dangerous tobacco carcinogens.

Nannystaters, not for the first time, tried to get their silent protest shut down.

Jeff, however, asked to speak to the attorney for the state, pointing out some relevant laws. He also asked that gentleman if, looking at the crowd, he was even able to identify Jeff’s crew — the very group the nannystaters claimed was disrupting their event. He could not.

The state, to its credit, decided in favor of free speech and free association and decided not to ask Jeff’s group to leave.

Nannystaters, to their credit, are consistent. Freedom simply does not appeal to them.

It’s up to the rest of us to decide if it appeals to us. If it does, we will reject the nanny state agenda, and choose our own beverages, food portions, salt intake and, yes, nicotine consumption, even if we drive the nannystaters nuts by doing such things as quitting tobacco cigarettes with e-cigarettes instead of the more politically-correct stop-smoking drugs made by major pharmaceutical companies.

State legislators, in Utah but also elsewhere, should reject calls for punitive taxes on e-cigarettes because they help people quit a cancer-causing activity. Cancer is a bad thing. One would think one would not have to point that out, but…

Some say kids who never smoked tobacco will smoke e-cigarettes, so they must be banned for everyone or punitively taxed to prevent this. A better option is to ban the sale of e-cigarettes to minors. This keeps the e-cigarettes away from the kids while allowing access to adults who are addicted to nicotine and have up-to-now been using carcinogenic tobacco as a nicotine delivery device.

Jeff notes an irony: policies promoted by nannystaters may put more e-cigarettes in the hands of kids. Here’s how: Vaping (e-cigarette) shops in many localities do not even let minors enter the shop, let alone buy e-cigarettes. So if kids do want access, unless they have an adult buying them for them, they have to go to the Internet. When states raise taxes on e-cigarettes, local shops become less attractive to buyers, and (presumably out-of-state) Internet shops, more so. The kids then end up with more online options to get e-cigarettes, while avoiding the taxes.

Our view is that the law, and government, should have biases in favor of freedom and public health. The nannystaters have a bias toward control and their vision of a perfect society, which apparently is one in which no one ingests anything the nannystaters deem unhealthy. The nanny state agenda is unworkable, as people don’t always make perfect choices and they are notoriously unwilling to let an unelected group of strangers decide what they do. In the case of e-cigarettes, the nanny agenda agenda is also dangerous. Some people — many people — find it less difficult to quit tobacco if they have a nicotine-delivery device that mimics the experience of smoking a cigarette, minus the tobacco, the smoke, and the smell. It is not a proper function of government to devise laws to deter people from doing safer things.

Let’s not have public policies that help keep these people hooked on cigarettes. Save lives. Say “no” to the nannystaters.