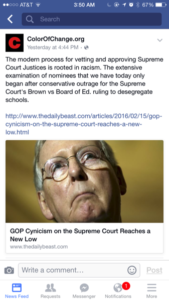 I wrote yesterday about President Obama’s attempt to cast the coming Supreme Court confirmation battle as being about him personally, so he can cast it as an issue of mostly white Senators opposing the nominee of a (half) black President.

This, he and his allies hope, will anger black Americans and help drive turnout among black voters this fall.

More evidence of this theory is a Facebook post by the left-wing Color of Change organization, founded by a man who left the White House staff to do it.

The modern process for vetting and approving Supreme Court Justices is rooted in racism. The extensive examination of nominees that we have today only began after conservative outrage for the Supreme Court’s Brown vs Board of Ed. ruling to desegregate schools.

The extensive examination of Supreme Court justices began in 1987, when President Ronald Reagan nominated Judge Robert Bork, easily one of the greatest legal minds of his age. Leftist Senators, led by Ted Kennedy and the man Obama selected to be his vice president, Joe Biden, attacked Bork with a series of lies so vicious that the process gave birth to a new verb, to “bork.”

The prior Supreme Court nomination vote, that of Antonin Scalia, was a unanimous 98-0.

The Bork confirmation battle was one of the nastiest and most disgraceful episodes in U.S. Senate history, but it was not about race and it was not led by conservatives.

Color of Change is unlikely to volunteer this information, so I will: Brown v. Board of Education was a unanimous 9-0 decision. The chief justice of the court at the time, Earl Warren, who wrote the majority decision, was a Republican (a former Republican politician, in fact) and was appointed by a Republican.

Indeed, if any single modern-era Supreme Court decision did contribute to an upswing in the examination of the views of court nominees, it would be Roe. v. Wade, the 1973 abortion decision in which the court twisted itself into pretzels to conclude a “right to privacy” unseen in the Constitution included the right to kill unborn babies (but not, apparently, geriatric Supreme Court justices).

Roe v. Wade is not seen as a racial case, although black babies are aborted at a far higher rate than white babies, and the total number of black babies aborted equals the astonishing and appalling level of 11 percent of the U.S. black population.

Obama’s exploitation of genuine differences of opinion about the best way to interpret the Constitution (the right wants to interpret as written; the left wants to decide cases based on which policy outcome best promotes its agenda) as actually a battle of nasty racist people against poor, pure him has no bearing in truth, but it will be believed by many, making an already-divided America even more divided.

Few people believe making America a less unified country was the reason he was elected, but Obama either doesn’t care, or he considers dividing America to be a worthwhile price to pay if doing so helps to promote his leftist agenda.