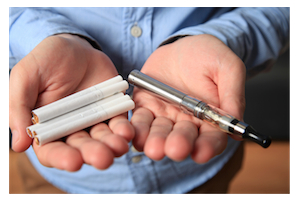 The National Center’s Risk Analysis Director, Jeff Stier, tells me that e-cigarettes may soon be banned in the United States.

This will set up a ludicrous situation in which e-cigarettes, which deliver nicotine to users without cancer-causing tobacco carcinogens or any smoke (including second-hand smoke), are banned, while tobacco cigarettes are perfectly legal.

(It’s almost like the government wants to kill us.)

Jeff tells me the FDA is expected to issue a rule, known in the regulatory businesses as a “deeming regulation,” that could ban all e-cigarettes that began sales after February 15, 2007. That’s almost all of them.

In the end, though, it comes down to this: who decides? Do you want the option of e-cigarettes for yourself or your friends and family who may be addicted to nicotine? Or do you want the federal government to take that choice away from you, effectively steering you toward tobacco, unless you quit nicotine outright?

Next Wednesday, the House Appropriations Committee may take steps to tell the FDA not to ban e-cigarettes. If you have an opinion on this, let the members of that committee know. This is one of those moments in which the public has the opportunity to make a difference, because not many people know that e-cigarettes may soon be banned. Those who get in touch with the Appropriations Committee’s members will likely be among the very few people they hear from.

Jeff Stier will be issuing a press release tomorrow morning with his thoughts on the matter and more information. It will be posted on www.nationalcenter.org. He’s also available for media interviews. If you are with the press and want to speak with Jeff, call Judy Kent at (703) 759-7476 or cell (703) 477-7476 or email [email protected] or email Jeff at [email protected]