ConservativeBlog.org
Posted at 13:23h in Articles, Blog by Amy Ridenour

The hacker known as “Guccifer 2.0” is the source of an intriguing new article in the online publication The Intercept. The article purports to reproduce notes taken by the staff of the Democratic Congressional Campaign Committee (the Democratic Party’s arm dedicated to electing Democrats to the U.S. House of Representatives) following DCCC meetings with various corporations, labor unions and industry and interest groups. 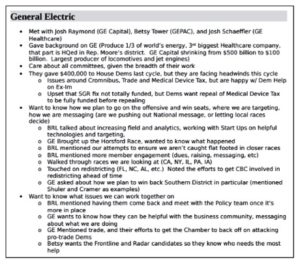 The notes for the DCCC’s meeting with General Electric, for example, appear to show that GE is supportive of the DCCC’s efforts (“GE wants to know how they can be helpful with the business community, messaging about what we are doing”). The notes say GE is pleased that Congressional Democrats have helped to reinstate and re-fund the Export-Import Bank, but GE isn’t entirely happy. There are “headwinds” against more contributions because GE is not pleased with some of what Congressional Democrats have done (on federal budget issues) and not done (repeal ObamaCare’s medical device tax).